Spring may not have sprung, but it’s definitely springing: the bulbs that we planted around the parade ring in the Autumn are poking their necks through the soil, the oyster catchers (which we christened Brian & Gillian) have returned to the roof of the old stand and the weights have been published for the Grand National.

One of the greatest pleasures, as the long nights of Winter give way to the lengthening days of Spring, is taking time to assess the early entries for the major races that take place in the second half of the jumps season. Speculating about the Gold Cup, the Champion Chase and the Champion Hurdle keeps us warm during the coldest months as we clasp our opinions, like hot-water-bottles, close to our chests. But it is the handicaps which present the most intriguing puzzles. 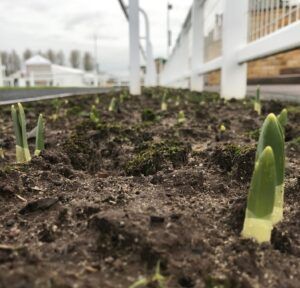 While much of the talk following publication of the Grand National weights this week centered on Tiger Roll’s chances of equaling Red Rum’s three wins, the stand out horse in the handicap was Cloth Cap: the winner of what used to be the Hennessy Gold Cup, allocated just 10st 5lb. He wasn’t stopping at Newbury and 16/1 feels like a much better price than the 14/1 about Tiger Roll, who has to shoulder 18lb more than Cloth Cap in his attempt to make history.

The weights for the bet365 Morebattle Hurdle will be published next Wednesday, after entries closed this week. Prize money for the race, the feature of ITV’s coverage from Kelso on 6th March, has been increased to £75,000 – with an additional bonus of £100,000 if the winner doubles up in any race at the 2021 Cheltenham Festival. There’s an abundance of quality among the 49 entries although, like the narcissi around the parade ring, the winner is likely to come from a pool of horses whose true potential is currently hidden from full view. There’ll be plots aplenty, but I’m intrigued by Proschema – trained by Dan Skelton to win two Jumpers’ Bumpers at Newcastle, his only outings since losing a shoe and pulling up in the Greatwood Hurdle (won by another entry, Emmet Mullins’ The Shunter).

A few of the entries in the bet365 Morebattle Hurdle will get a run at Newbury on Saturday, where this week’s selection is Mac The Man. He’s another who could be hiding his light under a bushel with a handicap rating of just 132, having run only once over hurdles (and twice over fences) since being brought down in the same race last year. On his previous appearance he’d beaten Protektorat and Song For Someone at Sandown. The former runs at Kelso today (Friday) in a three mile novice chase having already achieved a rating of 152 over the larger obstacles, while the latter has a hurdle rating of 158 and is fancied by some for the Champion Hurdle.