I have a confession. I can’t remember which horse won the County Hurdle on the final day of the Cheltenham Festival this year.

The problem is, after decades of dedicated Festival form study, I have developed a new obsession in the form of scotch eggs. And every time I think about Gold Cup Day, I can’t get beyond the delicious scotch eggs that we enjoyed in the car park before racing.

Homemade by my sister, using pork from her own pigs and seasoned to perfection, there is nothing in the World quite like them. But I keep on searching…

On the journey between Kelso Racecourse and Cartmel Racecourse, half way between junction 39 and 38 of the M6, you’ll find Tebay Services – the only family run motorway service station on the UK road network (unless you count their off-shoot near Gloucester which opened nearly five years ago). The services, which nestle on both sides of the motorway in the beautiful Westmorland countryside, incorporate all the normal things you’d expect to find like decent loos, a fuel station and a coffee stall. But there’s also a great café which serves local produce and a farmshop.

The farmshop is the reason that I stop, because it sells the largest selection of scotch eggs in the known universe. There are traditional scotch eggs, spiced scotch eggs, scotch eggs made with chicken and chorizo, black pudding scotch eggs and vegetarian scotch eggs (which I haven’t tried yet – but maybe I will one day, either when hell freezes over or they’ve run out of meat-based ones). 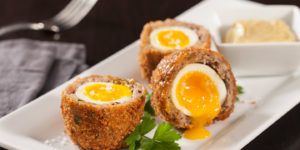 If you’re travelling to the next Cartmel race-meeting, Cumbria Crystal Cup Day on Saturday 20th July, it’s worth stopping at Tebay Services to shop for your picnic. Even if you’re not travelling from the North, as I will be, I’d say it’s worth the diversion. An extra fifty miles for a decent scotch egg is hardly any sacrifice at all.

And if you need an excuse to drive past and sample some scotch eggs this weekend, there’s racing at Carlisle on Saturday night where our selection is the Keith Dalgleish trained Beechwood Izzy. Tom Eaves carries 9st 7lb on the three-year-old filly, which means that he could probably afford to stop on his way up the motorway to buy a scotch egg too.

Some of the scotch eggs are cooked so that the yolks are still runny, a deliciously oozy surprise which can only result from a particularly perfect piece of precision timing in the kitchen fryer. Not unlike the ride that Harry Skelton gave Ch’tibello at Cheltenham this year, when he delivered the gelding to lead at the last and scoot up the hill to win the County Hurdle. That’s it, Ch’tibello! I knew I’d get there in the end.