Regular readers will know this already, but if you’ve clicked on the Border Post in the hope of profiting from the insightful tipping information, you’ve probably missed the point.

If there’s one thing that everyone involved in racing should understand, even though it’s frequently apparent that we don’t, it’s that the pursuit of wealth and power will not lead to any feeling of fulfilment. We read about it in the racing media on a regular basis: the fuse will be lit on some political issue or another, someone will express dissatisfaction about the distribution of money in the sport, and someone else will say that the power is all in the wrong place. And then everyone will get jolly cross.

What we sometimes forget is that horseracing (you might say ‘life’ except the two words are interchangeable in my book) is all about passion, knowledge, enthusiasm and love.

Jonathan Sacks, the late Chief Rabbi (who admittedly may not have been an obvious racing enthusiast) would have suggested that we think about it this way: If we had £100 and shared it with nine other people, we’d have one tenth of the wealth that we started with. If we had all the power to make decisions about our sport, but decided to share it with nine others, we’d end up with less power and probably no agreement. But if we share our passion for the sport, our knowledge, enthusiasm and love – those things, contrary to the laws of mathematics, will only grow. Sharing makes them greater instead of smaller.

The thing about tipping information is that it can cut both ways. If everyone who reads this week’s blog backs the weekend’s selection, Cloth Cap in the Ladbrokes Trophy at Newbury on Saturday, we might all increase our wealth thirteen-fold. Then again, there’s a fair chance that we could also end up with empty pockets. It’s a nuclear option. 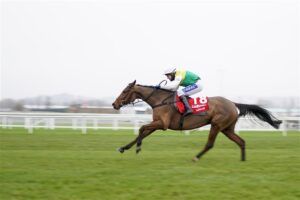 But if every reader understands that each race presents a unique and exciting conundrum: that the selection could easily have been Cloth Cap or Remastered in the Ladbrokes Trophy; Ahoy Senor or Flash Collonges in the John Francome Novice Chase; Nuts Well or The Ferry Master in the Rehearsal Chase at Newcastle; Not So Sleepy or Epatante in the Fighting Fifth Hurdle; if every reader of the Border Post shares just a fraction of the excitement engendered by such a sublime programme of jump racing, then we’ll have created a lot of passion, knowledge, enthusiasm and love. And that will take us a long way.

There’s a saying that, ‘What gets measured gets managed’. But often the things we measure don’t matter and the matters of most importance are immeasurable – if you hadn’t already realised, so it is with the pleasure of following the Border Post racing selections…