Is there anything quite so satisfying as French onion soup?

When cooked slowly it’s like a three course meal, the hors d’oeuvre being the delicious aroma that emanates from the saucepan while you caramelise the onions and then reduce the beef stock over an hour or so on a simmering heat. The main course consists of the unctuous meaty juices, combined with the sweet onion, which coats the mouth and sates the appetite; while the dessert is the crunchy croutons of crusty bread, coated in tangy mozzarella and Parmesan.

Yum yum, good things come to those who wait.

Which is the thought that occurred to me this week when Perth staged the first jumps fixture in the North of Britain since Wetherby on 17th March. For more than four months we have been starved of action while other sectors of the sport were given the chance to go ahead.

Of course it was wonderful to welcome the resumption of racing with the Guineas in June and it was exciting that Royal Ascot followed on so quickly afterwards. Contrary to some commentators’ opinions, I thought the Derby was the most exciting renewal for years – a 25/1 winner followed by placed horses at 50/1 and 66/1. That’s a result. But none of those events compare to the return of jump racing, which is a thousand times more exciting and ten-thousand times more romantic than anything that ever happens on the Flat.

And just like my French onion soup, the experience starts with anticipation – the first site of the entries and all those familiar names. Local horses and trainers. Then came the action – wins for Scottish trainers including Lucinda Russell, Andrew Hamilton and Iain Jardine, plus welcome visitors like Neil Mulholland, Rebecca Menzies, Dr Richard Newland and DJ Jeffreys whose family links to Kelso make him one of our own. But the cream on the cake arrived in the shape of success for Golden Town and Jimmy Moffatt. 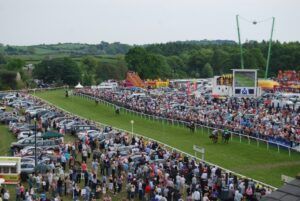 Golden Town, who has won four of his twenty-eight starts over hurdles at prices of 9/1, 10/1, 18/1 and 66/1 respectively, has become one of the most profitable horses in training to follow.

Jimmy, his hard-working handler, generally sets out his stall at Cartmel where he trains on the other side of the village to the racecourse. It’ll be a strange atmosphere when they race there on Sunday with roughly 1% of the people at the track that they’d normally expect. Even so, we can enjoy all the action on Racing TV and we’ll celebrate even more when Jimmy continues his winning streak with our selection: Oakmont in the Old Park Wood Handicap Hurdle.

So satisfying. Almost as good as my French onion soup which is nearly ready. Now, what did I do with the Parmesan?