Everyone should have a dream. I’ve been fortunate enough to have a few come true.

Not the one about the ground disappearing and then falling rapidly through space – thankfully that one hasn’t happened yet. But riding over fences in point-to-points, witnessing some of the greatest steeplechasers in action and being handed the responsibility for managing Kelso Racecourse: these are all things that I dreamt about in years gone by.

I also dreamt about winning the Tote Ten to Follow competition and, after a short hiatus, we’ve all been granted another chance…

Like Puck, in A Midsummer Night’s Dream, I’ve tried my hand at magic – albeit with similarly disparate results. Having anointed ten horses with my selection, they usually proceed to run in all the wrong races, frequently not very well and often against each other. 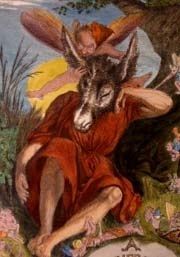 But let’s not get too down before we start. This is the start of a fresh season and there’s £250,000 of prizes to be won, including a guaranteed £175,000 first prize and several £10,000 monthly prizes. All we need to do is pick the right ten horses from a list of five-hundred and enter before noon on 30th November at (here’s the #ad) tote.co.uk/ten-to-follow. While entries for the main competition cost £5, there is a free-to-play version of the competition with a prize of £10,000. (Players must be aged 18+, terms & conditions apply).

Some of the horses that are sure to prove popular on people’s lists are set to clash this weekend – notably the unbeaten champion chaser Altior and the excitingly flamboyant Cyrname, both of whom are declared for the Christy 1965 Chase at Ascot on Saturday. While it may seem fanciful to go against Altior, victorious in all 19 of his starts over obstacles and a four-time Cheltenham Festival hero, I haven’t enjoyed watching a horse like Cyrname since Desert Orchid soared into action more than 30 years ago.

Like Desert Orchid, Cyrname appears to have a preference for right-handed tracks and a particular liking for Ascot and Kempton. We know that he stays, he sets a scorching pace and throws in tremendous leaps – frequently standing off from outside the wings of the fences. He is a dream of a horse.

And while on the subject of dreams, with apologies to William Shakespeare (if you’re going to plagiarise, you might as well plagiarise the best)…

If this blog hath offended,
Think but this and all is mended:
That you have but slumber’d here
While these visions did appear.
And this weak and idle theme,
No more yielding but a dream.
Readers, do not reprehend:
if you pardon, I will mend.

And, as I am an honest Puck,
If we have suffered some poor luck
And our selections have failed to perform,
We will make amends ere long;
Else the Puck a liar call;
So, good night unto you all.
Give me your hands, if we be friends,
And let’s hope Cyrname can make amends.