Following last week’s exciting announcement, about the resurrection of the Tote’s ten to follow competition, it seems that all of the Border Post’s readers have decided to write in at once. I’ve been inundated with messages and fortunately both of you wanted to know the same thing: which ten horses will I be including in my own list.

The burden of responsibility has weighed heavily on me because I know how helpful it is to have a list of horses to avoid. Anxious bloggers make rotten tipsters and so the pressure continued to mount through the week until I heard about a recent scientific trial involving Russian dairy cows. 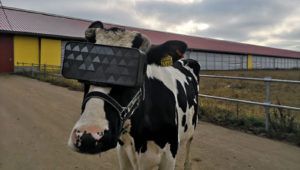 According to a statement from Moscow’s Ministry of Agriculture and Food, cows at the RusMoloko farm in Moscow’s Ramensky district were fitted with virtual reality headsets in a bid to reduce their anxiety. The specially adapted headsets (a little bit larger than the ones designed for most Russian humans) simulated the experience of being in a Summer field. Apparently this boosted the overall emotional mood of the herd and initial results have suggested a positive link between the cows’ emotional experience and their milk yield.

The suggestion that a calm atmosphere can help to enhance an animal’s performance is not as far-fetched as it sounds. On a tour of David Pipe’s Somerset yard in 2017, the annual members from Kelso Racecourse noted a small number of stables that had large graphics pasted onto the back wall – tranquil scenes of calm landscapes and trees. The theory was that the images would help to relax the horses and help them to perform better. At any rate, David reasoned, what harm could it do?

When we visited Venetia Williams’ stable this Autumn, we discovered that every horse is turned out regularly in small paddocks set in the beautiful Herefordshire landscape. The atmosphere was so relaxed – how could the horses fail to react positively?

So in order to reduce my own anxiety I took the only sensible course of action. No I didn’t go for a walk in the stunning Borders countryside; I adjourned to the Scottish Malt Whisky Society in Edinburgh where I gained inspiration from a delicious 23 year-old with a high alcohol content.

The first horse I nominated was a previous Kelso winner – Elvis Mail, my selection for the Intermediate Hurdle at Newbury on Saturday. Unfortunately he’s obviously such a ‘dark horse’ that he’s not actually in the list of 500 horses that can be selected for the Tote Ten-to-Follow.

So here are the ten that are: Benie Des Dieux, Blue Flight, Cyrname, If The Cap Fits, Klassical Dream, Lostintranslation, Gumball, One For Arthur, Rouge Vif, and Thyme Hill.

Remember to enter before noon on 30th November at (here’s the #ad) tote.co.uk/ten-to-follow. While entries for the main competition cost £5, there is a free-to-play version of the competition with a prize of £10,000. (Players must be aged 18+, terms & conditions apply).

Now it’s time to relax and enjoy the competition… and maybe have another dram.