Fortunately there are signs that my wish could be about to come true. The ongoing review of the 2005 Gambling Act reportedly includes a range of proposals including affordability checks on individuals who wish to place bets, and limits on deposits in betting accounts, stakes or losses.

Thank heavens! I’d always hoped that the Government might intervene to suggest a better staking strategy for my bets at the Cheltenham Festival – much more important than all that other stuff like health, education, roads, law and order, sanitation, defence of the realm, etc.

Perhaps there will also be a hotline I can call for advice as to whether I should risk taking odds of 20/1 about Nuts Well (this week’s selection in the Skybet Chase at Doncaster) or plump for the much shorter price about Champ in Saturday’s Cleeve Hurdle. 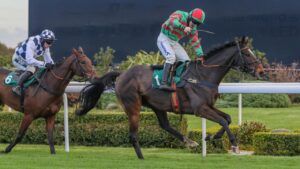 But I hope that the Government won’t stop there. Once they’ve implemented legislation to determine what proportion of my income I’m permitted to spend on betting, perhaps they could do the same for wine consumption. Maybe they could compel Sainsburys, Tesco, Berry Brothers and Laithwaites to compare notes on my recent purchases and ensure that I don’t consume more than twenty-one units of Rioja per week or lay down too much Château Léoville Las Cases.

While I’ve successfully given up alcohol for weeks and months at a time, lost interest in betting throughout most Flat racing seasons and never even bothered to take up smoking, I’m ashamed to admit that I have an addiction which I’ve tried hard to break and failed. Isn’t it about time the Government intervened to prevent Costa, Starbucks and all those pesky independent baristas from giving me the jitters? I demand that each and every coffee purchase, from the supermarket to the highstreet, be tracked and strict limits applied for my own good.

Of course there are those who suggest that, while it is important to consider safeguards for vulnerable individuals, this potential regulation is disproportionate; that it would simply lead to black market suppliers – unregistered coffee stalls, speakeasy bars and off-shore based online bookmakers. A recent YouGov survey found that just 16% of those who would bet would allow a betting company to perform affordability checks using bank account details or wage slips – which presumably means that 84% would seek an alternative unregulated route through which to place their bets.

Apparently some people are writing to their local MPs, by clicking on a link like this, to protest at the potential interference in their day to day lives. Me? I can’t decide. I’m just waiting to be told what I’m allowed to do next.