Having found £3.78 hiding down the back of an old sofa, it was a relief to learn that the Treasury has decided that we need to keep one-penny and two-penny coins in circulation for a few years to come. I’m sure that I can find more coppers in the furniture at home if I look hard enough.

Most of us are the same. The Royal Mint made 213 million twenty-pence pieces in 2016. But when the old one-pound coin was being phased out, the nation went in search of forgotten piggy banks and found so much small change that the Royal Mint didn’t need to make any twenty-pence coins at all in 2017. Not one – look in your pocket, you won’t find any.

I know that I haven’t got any in my pockets, because they’ve both got large holes in the bottom. Which could be why I discovered all the coins in the sofa. 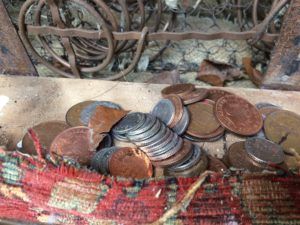 Punters are even worse. Many of us are so underwhelmed when our ten-pence each-way super-yankee registers just two placed horses (instead of the five winners that we were confidently expecting) that we don’t bother to pick up the resultant winnings of 42p. The uncollected bets are known in the industry as ‘sleepers’. And, as we know, pennies make pounds and pounds make millions – an old adage which makes sleepers a handy bonus for high-street bookies like Ladbrokes and William Hill. More valuable, even, than my sofa.

Mind you, it’s become increasingly difficult to spend a penny. I seem to remember that I used to buy four gummy-bears for half-a-pence when I was little. So in an effort to conduct some serious research (never let it be said that this blog leaves a cushion unturned), I went to the sweet shop to find out what I could buy for a penny now. The answer was nothing. Gummy-bears were available, but only in £1 bags of Haribo Starmix. One bag contained 63 sweets, making each one worth about 1.6 pence. Unfortunately only 28 of them were gummy-bears, although I’ve discovered that I’m also quite partial to purple fried-eggs.

Although racegoers can now bet on-course with the Tote using their debit cards, many punters are still using cash – in every variety of denomination. The total pool for the place-pot at Kelso on Wednesday amounted to £28,716.34, so someone must have been mining their small-change. The dividend, for finding a placed horse in each of the first six races, was £158.10 – which is my kind of result, especially as five of the six races were won by the favourite. It just goes to show how easy this game is.

I’m going to convert my dusty old tarnished coins into a few crisp bank notes, in a process which may or may not be called money laundering. All £3.78 is going on Copper West, the horse with the most appropriate name in Haydock’s Intermediate Handicap Chase on Saturday.