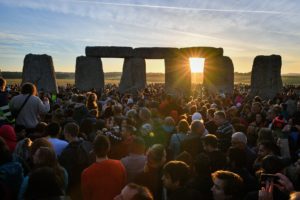 While there are many people around here that believe summer has already been and gone, during that brief sunny period we enjoyed in mid-May, an astrologer would tell you that it has only just begun – starting, as it does, with this week’s summer solstice.

The longest day of the year is one of the oldest excuses for a party that has ever existed. For five-thousand years, people have turned up at Stonehenge to watch the light fall on the ancient Heel Stone and the Altar Stone as they come into alignment with the rising sun.

Rather fewer people turn up at the Standing Stones of Stenness, but that’s because Orkney doesn’t have a huge population and the islands are a much further distance for the pagans of Salisbury and Southampton to travel. Which isn’t to say that there isn’t the odd aging hippie or white witch that dances naked at the site, where the Neolithic stones are positioned such that they correspond precisely with both the setting sun and the rising sun during the northern hemisphere’s shortest night.

Even in Egypt, where the relatively close proximity to the equator means that daylength doesn’t vary a great deal, people from Cairo gather on the summer solstice to witness the sun setting precisely in the centre of two of the famous pyramids of Giza.

People all around the world will celebrate the long daylength this weekend by participating in night-long music festivals, building pyres on mountain tops, setting off fireworks or sailing brightly masted boats into their harbours. There will be ancient ceremonies, summer balls and quirky sporting events. But not in British racing.

There will be no midnight steeplechase for racegoers because the BHA, seemingly at the behest of the Horsemen (the racehorse owners, trainers and stable staff), have imposed a 9pm curfew on Britain’s racecourses. And while I fully understand that it is important to consider the logistical challenges presented to the sport’s participants, sending everyone home so early seems a bit, well… poopy. Where’s the fun? Where’s the adventure and the excitement which could so easily be associated with Britain’s longest raceday?

At Haydock, where there’s evening racing on Saturday, the sun will set at 9.43pm and the last light will fade at 10.36pm – plenty of time for some twilight racing. At Perth, where Beau Sancy is our selection for the afternoon’s racing, sunset is 10.07pm and last light 11.12pm. What a party we could have!

I’m all for taking a lead from the residents of Sommaroy, in Norway, where islanders have signed a petition to banish time altogether. Residents are seeking to become the world’s first time-free zone. Work, play, picnic or party at 3am or 3pm if you wish – because no one is watching the clock. Time needn’t be measured and watches would become superfluous. Of course it helps that the sun last rose in May and won’t set again until late July, producing sixty-nine days of continuous daylight.

Now that’s what I call a summer.