One of my favourite lines, from any movie, is delivered by Albert Finney in A Good Year as he explains why his character never got around to writing a will: “Convinced that Death, like all tradesmen, would be unable to find my front door, and always having believed wills to be an open invitation to the reaper…”

Well, we’ve had a lot of tradesmen at the racecourse recently, which was just the sort of subliminal message that I needed to crack on down to the solicitor’s office and sign the latest version of my ‘last will and testament’. It’s a morbid process which, despite feeling fighting fit right now, provoked a variety of thoughts including three reasons why I’m really not looking forward to dying. 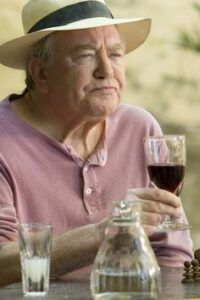 The first is that I’m hoping it doesn’t hurt too much – I’m okay with the bit about having no feelings at all (some of my staff think I’ve already reached this point), but the bit in-between feeling great and feeling nothing doesn’t sound like a barrel full of laughs.

The second reason is grief. Not mine, because I won’t be here, but the grief of those that I love. I hate the idea of putting them through it. But, barring a subscription to one of those cryopreservation payment plans, there’s actually not much choice. I like to think that the measure of grief can only be equal to the volume of love – so if we just concentrate on all the love that we feel, and all the joy that it brings, there’s no need to dwell too long on the grief…

But you didn’t tune into this blog for lectures on love, or even pontifications about pain, what you really wanted to know (I think) is my third reason for not wanting to die anytime soon: the unfinished business.

The truth is that I am so excited about the plans that we’ve been working on for Kelso Racecourse. Once we’ve completed the new Weighing Room building (construction might start as early as next year), we’ll be able to refurbish the listed Grandstand which celebrates its two-hundredth birthday in a few months’ time. All of that is going to cost a few millions of pounds, which is money we don’t have in the bank – so there’ll be some years of exciting racing while we make enough profit to repay the construction loans.

And then we can start the next phase – a brand new grandstand to replace the Doody Room, offering amazing views of the track on one side and the parade ring on the other. I can hardly wait to stand on the roof to shout the winners home – lots of them, for several tens of seasons, which means dodging the reaper for quite some time to come.

The other quote that I like, from the same film, goes something like this: “A man learns nothing from winning. The act of losing, however, can elicit great wisdom. Not least of which is, how much more enjoyable it is to win…” This week’s selection is Hungry Tiger in the PSR Marquees Handicap Hurdle at Cartmel on Sunday.