If the mighty oak is considered to be the king of trees, then beech is the queen. And, according to books on the subject, the beech fairy offers gifts of prosperity and wisdom to all those who acknowledge her presence.

Apparently her speciality is to help people let go of rigid ideas, so that they may move forward in faith and openness. So if you feel restricted by stale routines and preachy protocols, like many of us after fourteen months of lockdown, it’s time to discover the fairies at Kelso Racecourse – where we have just planted an avenue of 24 beech trees and a neat row of beech hedging.

The bare root saplings were sourced from Ian Rogers at Stichill Forest Nursery, just five minutes from the racecourse, so they should already be acclimatised to the gorgeous Borders climate where we have been bathed in sunshine for the last couple of weeks. 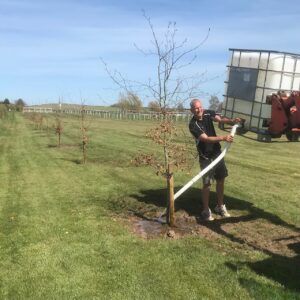 Already 10ft tall, they have the potential to reach more than ten times that height and live for three-hundred years. Which is why we don’t plant trees for ourselves, but for our children, our children’s children, and our children’s great-great-great-grand-children. Because when they come racing at Kelso in 2221, I’ll expect them to find a splendid row of alternate copper and green beech trees with impressively sturdy trunks, formed from the 100 tonnes of carbon dioxide which they’ll have removed from the atmosphere through the magic of photosynthesis.

The descendants of today’s racegoers will be able to lie down in the dappled shade of the trees, alongside the finishing straight, and take inspiration from the form experts of today – the beech fairy being adept at fostering connections to the past, ensuring that we learn from old mistakes and retain what is useful. In other words, as soon as the trees are big enough I’ll be carving aphorisms into the bark like: “Always back the outsider of three,” and “Never chase your losses.”

While not wishing to be accused of being away with the fairies, I have spent a few minutes in contemplation of the beeches close to the two-furlong marker and the thought that popped into my head was this: there’s no such thing as a bad winner of Kelso’s Premier Hurdle. Our selection for the weekend is therefore last year’s Kelso winner Clondaw Caitlin, who will be ridden by Champion Jockey (for one more day) Brian Hughes, in the bet365 Select Hurdle at Sandown.

The word ‘beech’ shares it’s derivation with the word ‘book’, the wood from beech trees having been commonly used as material for writing tablets; meanwhile the Latin name Fagus sylvatica refers to the Gallo-Roman god Fagus – who was believed to be the special protector of redheads. I’m not sure what that has to do with the price of fish, but it’s a fact which is sure to please at least one of the racecourse team.