While it’s always good to crown a clear winner, sometimes it’s just as important to ensure that there isn’t an unjust loser.

That’s what happened last Saturday when two horses galloped through the dusky twilight of the final race at Cheltenham. Judge Guy Lewis was unable to separate Elle Est Belle and Ishkhara Lady, declaring a dead heat which led some commentators to declare that racing was stuck in the dark ages.

But the view presented to armchair spectators is deceptive; the television camera is located at a slight angle to the line and the winner isn’t necessarily obvious. The legendary punter Alex Bird made a fortune from betting on the result of photo finishes, frequently backing against the view of casual racegoers who were convinced they knew the result having seen the position of the horses before and after the line. Bird’s secret was to stand exactly on the line with his left eye closed and not to watch the horses. Instead, he would watch the line itself and see which horse’s nose touched it first. He bought a mansion, several Daimlers, an aeroplane and a string of racehorses with his winnings. That’s more than we’ve managed so far – this week’s selection is Clan Des Obeaux in the Betfair Chase. 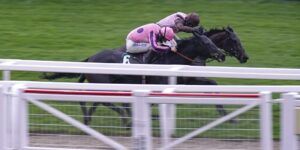 The opportunity to bet on photo-finishes arose after the second world war when Group Captain F.C.V. Laws, the Directory of Photography at the Air Ministry, was invited by the Jockey Club to apply the latest air reconnaissance technology to the determination of horserace results. After a couple of years of trials, the equipment was called on by a judge for the first time in the Great Metropolitan Handicap at Epsom in 1947. If you’re ever asked in a pub quiz, Parhelion beat Salubrious by a head.

The technology heralded the end of an era when it wasn’t unusual for the judge to shout across the track to ask the jockeys which of them had finished in front. On some occasions, depending on which horse the jockeys had backed, they even told the truth.

In 1913, Craganour was famously placed second to Louvois by the judge in the 2000 Guineas, despite most racegoers observing that he’d passed the post a couple of lengths in front. Craganour’s owner Charles Bower Ismay was part of the family which had built, sailed and sank the Titanic and most historians agree that it just wouldn’t have been socially acceptable for such a man to win the Guineas. The racecourse judge was merely adhering to the view of the public.

But it would be wrong to assume that the judge was always on the side of the public. In his book, A Long Time Gone, Chris Pitt recounts a story told by an amateur jockey who rode at Loughborough at the start of the Twentieth Century. When a well backed favourite fell at the second last fence, the crowd (including several professional backers who stood to lose significant sums) proceeded to push the judge’s sentry box over, trapping the judge face down inside. No winner was declared that day, but the race was declared void and there were therefore no losers either.