I have worked long enough in public relations to know that the media, be it television, radio, print or digital, thrives on two things: bad news and stories planted by people who want to sell stuff.

Bad news consists of nasty things that fascinate ordinary people – like brutal murders, deadly chemical spillages and natural disasters that indicate that the end of the World is nigh.

You could include, too, all of the ‘project fear’ predictions about Brexit such as: forecast lorry queues on the M20 outside Folkestone Racecourse (which won’t really matter seeing as the track is closed anyway), shortages of Magnum ice-creams and the possibility that your mobile phone might not work in Germany. Although of course these news items also fall into the category of being planted by people who want to sell you stuff – or possibly by politicians who are terrified of change and concerned that they may be required to grow a backbone.

All stories involving good news are inevitably sponsored by people that want to sell you something. So it follows that the research that demonstrated that dog-owners live longer was probably sponsored by Pedigree Chum, and the story that told you that chocolate is an aphrodisiac owes its origins to a Valentine’s Day press release from Cadburys.

Horseracing rarely hits the headlines, but it was inevitable that the sport would attract some attention when it announced that fixtures would be abandoned as a result of an Equine Influenza outbreak.

“How many racehorses have died of Equine Influenza?” one journalist asked.

“What biosecurity measures are you taking?”

“Well, it’s a bit like an outbreak of nits in a school. We don’t want the horses to rub their heads together or share the same equipment.”

The suspension of racing was a bad news story – it will cost the industry a sizeable chunk of money and it continues to be incredibly frustrating for many people who are directly and indirectly involved. But like many bad news stories, it hasn’t been quite as traumatic as some of the media would have liked. No one’s died and the story hasn’t sold very many newspapers. 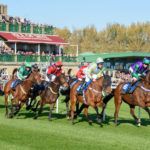 Now that racing has resumed, we’re following the more traditional media route – pretty much encapsulated by everything that I write in this weekly blog. It’s a good news! Racing is back on!

Yes of course I’d like to sell you something. Go on line and buy a ticket to come to the races – anywhere really. In the next week there are scheduled fixtures in the North at Carlisle, Wetherby, Doncaster, Sedgefield and Newcastle. In two and half weeks time, on Saturday 2nd March, we’ve a fantastic programme of races here at Kelso.

If you’re the sort of reader that prefers bad news, then try backing this week’s selection…

It’s the recent Kelso winner Shades Of Midnight, who is entered at Haydock on Saturday and could run in either of the valuable three-mile hurdle races.