With more than 50 million repeated plays, the most frequently performed song on the planet is an accompaniment to the Disneyland boat ride: It’s a Small World.

Like Cadbury World for example, where almost the first thing they give you (after some hand sanitiser and a temperature check) is three bars of chocolate. Visitors ramble through a fibre-glass forest of cocoa trees and uncover the mystery of manufacturing Cream Eggs.

Kipling (the writer, not the cake maker) said “The first condition of understanding a foreign country is to smell it.” The scent that lingers longest on the clothes, even after leaving Cadbury World, is the warm and welcoming, sweet fragrance of Dairy Milk – enticing on arrival, although surprisingly effective at suppressing the appetite by the time the visitor arrives at the world’s largest Cadbury’s chocolate shop at the end of the tour.

And so to Legoland – where there were no temperature checks, hardly any social distancing, very few face-masks and plenty of empty hand sanitiser dispensers. In a land of plastic people, it shouldn’t be surprising that Covid isn’t perceived as much of a threat. Time will tell whether the thousands of travellers passing through Legoland are foolhardy Covid refuseniks or whether the theme park merely grants a glimpse of the future – the rapidity with which normality can be restored to a fear-laden population.

I enjoyed Legoland. While there weren’t many horses and I couldn’t find a betting shop anywhere (this week’s selection is Solomon Grey in the Summer Plate at Market Rasen), there were plenty of other opportunities to lose money – like the arcade games where the player has to direct a small crane to grab a soft toy behind a Perspex window. Like backing a horse that gets beaten in a close finish, there’s a familiar feeling as the toy slips from the grasp of the crane at the very last moment… 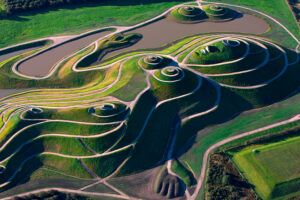 The holiday itinerary took us far and wide, we visited spa towns and beauty spots, we saw relatives and wild animals in safari parks (yes – both of them in the same place; and yes – sometimes it was difficult to tell them apart).

We stopped in the Lakes and in Yorkshire, known to some as ‘God’s own county’. But it wasn’t until we were almost home that we saw the goddess draped across the landscape in front of us. Northumberlandia reclines close to the A1M where her curvaceous body decorates the periphery of an opencast mine, her chest pointing up at the clear sky. She’s a beautifully super-sized girl, in a small, small world.