Anyone who has ever suffered from conjunctivitis will understand the discomfort that I’ve experienced during the past week: the feeling that there’s a large piece of grit beneath your eyelid and razor blades at the back of your eyeball, combining to induce the mother of all headaches.

As you might expect, I’ve put up with the suffering in manly fashion, hardly mentioning it to anyone at all – except everyone with ears and time enough to listen. Truth be told, I was getting quite anxious when the sight in my right eye went all blurry, but then a close and caring relative told me, “It’s okay you’ve a spare one on the other side of your face.” Which was comforting until I needed a pair of socks…

Because I’ve lost count of the times that I’ve been told that, if I want to find the socks in my sock drawer / the butter in the fridge / the salt on the table, I have to use BOTH eyes. Like many men, I have one of those finely calibrated brains which uses only 50% of the output from the optic nerves, thereby devoting maximum wattage to important things – like trying to remember the name of the horse that split Celtic Shot and Celtic Chief in the Champion Hurdle or wondering whether this week is the week for the recycling bin or the other bin that doesn’t have a name. The uncycled bin?

Fortunately I know that my mind’s eye is absolutely fine. Having watched the racing from Leopardstown, using only my left eye, I could clearly see Monkfish winning the Brown Advisory Novices Chase next month, and The Storyteller winning the Stayers Hurdle at the Festival too. In the meantime, my mystic eye tells me that Water Of Leith, this week’s selection, will win at Lingfield tomorrow – I know nothing about all-weather track form, but it’s a very long way for Jim Goldie to send a horse. 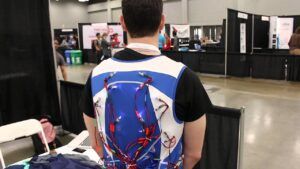 Happily, my right eye is already starting to feel much better. Even so, it is reassuring to know that researchers are discovering new ways of helping people with permanently damaged eyesight to ‘see’ by sensory substitution. They have managed, for example, to link cameras to a hi-tech vest which, when worn by a blind person, enables the wearer to feel objects around them through discreet electrical impulses applied via the vest to the skin.

Similar developments have allowed humans to experience other senses, more commonly used by birds and bees, such as an awareness of the Earth’s magnetic fields – all delivered through touch receptors on our skin. In the future it is predicted that it will become possible to feed data directly from the internet into the brain. I’ll be able to refer directly to the formbook without even having to look for it on the shelf: Ah, yes – that’s it.  Classical Charm, second to Celtic Shot, in the Champion Hurdle, 1988!