The Inuit, apparently, have fifty different words for snow. Which is about the same as we have for the ground on a racetrack.

Every racegoer will be familiar with the official terms that we use to describe the going: ‘firm’, ‘good’, ‘soft’ and ‘heavy’, with graduations like ‘good to firm’ or ‘good to soft’. At Newcastle on Saturday, where our selection is Black Pirate, the going is currently ‘soft, good to soft in places’.

Back in the 1980s we occasionally described the going as ‘hard’. The equivalent Inuit snow word might be ‘kaneq’, meaning frosty, although racing would more likely be abandoned under those circumstances nowadays (irrespective of whether the hardness was the result of frost or ground-baking sunshine). 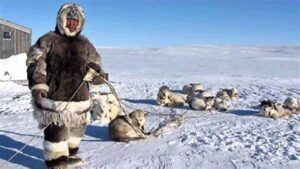 All-weather surfaces are almost always ‘standard’, and Irish turf tracks are sometimes ‘yielding’, but despite the variety of official descriptors, these words alone are frequently insufficient to convey the true nature of the going.

Sometimes the rain softened ground in early Autumn or late Spring has a ‘bit of give’ – but horses can gain plenty of purchase on the well rooted turf and we’d possibly call it ‘lively’. In Winter the same rain softened turf, with its flaccid roots and weak leaf, will sap the energy from the horses’ hooves and we’ll almost certainly call it ‘dead’.

Add more rain and the horses will slosh around the bends, kicking the sodden turf out as they go – the jockeys will say that it’s ‘bottomless’ (the Inuit word for soft deep snow is ‘muruaneq’). Even more rain and it could end up like the flooded track at Worcester, which becomes ‘choppy’ – but it’s great for canoes.

As the ground dries out again it may become ‘sticky’, ‘treacly’ or ‘holding’. Under these circumstances, a racehorse owner who believes his horse to be quick might tell you that the ground is too ‘slow’. If the horse is slow, you’ll probably hear that the track is too ‘quick’. I don’t know why – it’s just one of those things.

This week at Kelso Racecourse the ground-staff have been moving the steeplechase fences, the hurdles and the running-rails across the track – so that the inner line that the horses race on is moved outwards. Only horses which have raced very wide of the bends at previous meetings will have used this ground – which we like to call ‘fresh’. It’s our way of providing the best possible racing surface for the £75,000 bet365 Morebattle Hurdle on Saturday 6th March.

At the last meeting, Callum Bewley brought his mount in the bumper right over to the stands side where he finished exceptionally well. Unfortunately he also ran the wrong side of the hurdle wings, took the incorrect course and was disqualified. But still, the ground (which is the same ground that they’ll be using next weekend) looked very very nice indeed!