Despite having two more fixtures to stage at Kelso before the annual Summer break, the official Jump Racing season will reach its conclusion at Sandown Park on Saturday when Brian Hughes will be crowned Champion Jockey for the second time.

While riding two-hundred winners is a tough task, deciding the winner of the jockeys’ championship is pretty straightforward – determined, as it is, by the total number of victories.

Not so Kelso’s ‘Shades Of Midnight Award’ for the Horse of the Season, the winner of which will be determined by a panel of judges who face an unenviable task… 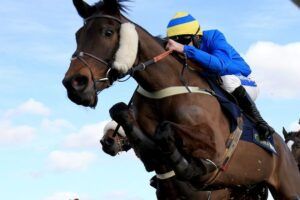 Naturally every racehorse owner that has attended Kelso this season will have an idea that their runner deserves the award – which is not intended to go to the best horse, but the one which has done most to endear itself to the racegoing public. Even the process of drawing up a shortlist is fiendishly tough.

Nominations have been received throughout the season and, unsurprisingly they include several multiple winners. An early flurry of e-mails arrived in favour of Cedar Hill who won three races at Kelso during the 2020/21 season and struck again at the Christmas Meeting. Nominated horses to have won a brace of Kelso races this season include: Lissen To The Lady (trained locally by Sandy Forster), Nells Son (who scored for followers of this blog at 16/1 in the bet365 Premier Hurdle), Sounds Russian (a potential future Grand National winner for Ruth Jefferson), and Nuts Well (trained by the remarkable Ann Hamilton at Capheaton).

Nuts Well, who happens to be our selection for the Oaksey Chase at Sandown, needs no introduction to Kelso racegoers. Having won the NSPCC School Service Chase, our valuable early season two-mile feature race, three times in four years, he proceeded to confound convention by storming home in the three-mile bet365 Premier Steeplechase on Morebattle Hurdle Day. He is a remarkable and popular creature, as well as the highest rated horse to have been nominated to date.

But is he more remarkable or more popular than Big River, the joint winning-most horse ever at Kelso? Big River (or Henry as he is known at home) ran in five races during the 2021/22 season – all of them at his beloved Kelso – winning on two occasions, the peak of his achievements being victory in the Borders National in December. In thirteen career appearances at Kelso, the Lucinda Russell trained twelve-year-old has only once failed to finish make the Winners’ Enclosure – when being brought down through no fault of his own.

The only horse nominated, so far, to have won three races at Kelso this season is Breaking The Ice, who broke a long quiet spell for popular Cumbrian trainer George Bewley in October – before scoring again in November and December.

It’ll be a tough decision and I’m glad that it’s not mine to make. If you have an opinion, it’s not too late to make a nomination of your own – send them, before midnight on Sunday 24th April, to info@kelso-races.co.uk .