I’m one of those annoyingly happy people who loves the place where they work. Few destinations match the appeal of Kelso Racecourse, which makes it difficult to find anywhere to go away on holiday. While that hasn’t figured high on my list of problems during the 2020 stay-at-home-athon, it didn’t stop me getting quite excited when I spotted the perfect place for a future relaxing break.

Because, as far as I’m concerned, the only thing better than a home-from-home is a grandstand-away-from-work. If I could holiday in Kelso’s grade 1 listed grandstand, designed by the renowned York-based architect John Carr, I probably would. But despite having access to a sauna and showers in the Jockeys’ changing room, I don’t think that the 198 year-old sandstone building (one of the oldest examples of a permanent grandstand anywhere in the World) would be as comfortable as a modern spa. The closest thing to a bed is the narrow couch used by the physio to treat jockeys and the heating is entirely dependent on the coal fires which are lit by Gillian on racedays.

So imagine my delight when I discovered that another building designed by John Carr has just reopened as a hotel and spa, following a £70 million restoration, in the Peak District National Park.

Buxton Crescent was the brainchild of William Cavendish, the 5th Duke of Devonshire, who commissioned Carr to design and build the four-storey, semi-circular stone terrace, with its arcaded walk and 30 low-relief columns, between 1780 and 1789. Despite a few obvious differences, such as the concave frontage and significantly larger scale, the Crescent will seduce Kelso regulars with some familiar features – most notably the neoclassical arches which form the impressive base of the building. 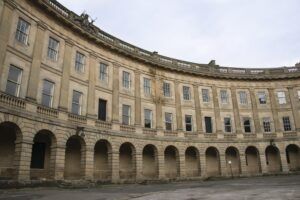 It isn’t possible to see any horses from the roof-top of the hotel, but it does boast an open air swimming pool – one of three pools that form part of the spa facilities that proved so popular during Georgian times. The source of the naturally geothermally heated water for the spa is a spring served by the massive limestone catchment of the Peak District. Percolated for 5,000 years, the water rises at Buxton where the limestone meets impermeable grit stone and is fed to a well which provides free water to the town as well as the Nestlé bottling plant which produces 230 million bottles of mineral water, each year, on the outskirts of town.

Like Buxton Crescent, the grandstand at Kelso was also built adjacent to a well – although the silty water that filters through the alluvial soil of the Berrymoss doesn’t have the same cachet. Certainly, if we bottled it, I doubt it would contribute significantly to the funds required to refurbish the building. Interestingly however, I note that Buxton Crescent benefited from £40 million worth of funding from the public purse.

Just like a pound on Pic D’Orhy, our selection for Market Rasen on Saturday, I am sure that the money will prove to be well spent. Not only is Buxton Crescent a stunning building, anyone who loves the grandstand at Kelso is bound to want to stay there – which has to be a good thing for the town of Buxton and all the people that work there.