Bernard Cribbins, who died this week aged 93, was a Womble. In fact he was all of the Wombles. He was also the voice of Buzby, the little yellow bird in the BT adverts, and he was Perks the station master in The Railway Children. He was Midshipman Poop-Decker in Carry On Jack, he told stories on Jackanory and was still telling them fifty years’ later on Old Jack’s Boat.

In a two-way tussle for the title of ‘Most Influential TV Voice of my Childhood’, there’d barely be a hair’s breadth between Cribbins and Peter O’Sullevan – except O’Sullevan never released a hit record (unless you count the LP of his commentaries on Red Rum’s five Grand Nationals – which was a huge hit with me but not, that I’m aware, many other people).

Bernard Cribbins, on the other hand, released two top-ten singles in 1962 and one of them was still rattling around in my head this week as we continued preparations for the next phase of development at Kelso Racecourse. I looked at the place where Rosie’s Bistro used to stand and the unmistakable voice of Cribbins kicked in: “There I was a-digging this hole, a hole in the ground, so big… and sort of round it was. There was I, digging it deep; it was flat at the bottom and the sides were steep.”

And then I imagined one of the BHA officials turning up, “Do you mind if I make a suggestion? Don’t dig there, dig it elsewhere; you’re digging it round and it ought to be square. The shape of it’s wrong, it’s much too long… And you can’t put a hole where a hole don’t belong.”

Well, as it happens, we just couldn’t bear to dig it elsewhere. And we’re not exactly digging it round, but we didn’t want it square. And if anyone disagrees, it doesn’t bother me – because that’s the place where the hole’s gotta be. 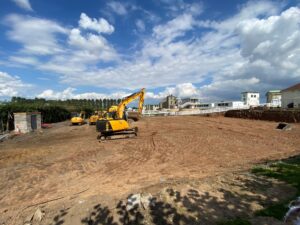 The space that we’re creating will eventually become the site for a new two-story building to contain the Weighing Room, jockeys’ changing facilities, medical centre and the Stewards’ Room (on the ground floor), as well as a hospitality suite on the first floor. We are also developing plans for a brand new Bistro, only it won’t be quite the same as the old one – it will be designed without an asbestos roof, spongy floors or walls that we ask customers not to lean on too hard…

The current works will give us a head-start on construction when we eventually gain permission for the new facilities. In the meantime, you can still book your table for Rosies’ Bistro in the normal way. Exciting plans are underway for a comfortable, but temporary, structure to be in place for the Bicentenary Celebrations on Wednesday 14th September, as well as the remainder of the season.

The return on our selections have been poor of late – this weekend we’re trying to dig ourselves out of a hole with Popmaster in the Stewards Cup at Goodwood.