Despite the government’s investment of £1.2 billion in a meteorological super-computer next year (that is claimed to be capable of predicting the weather on a street-by-street basis), there will always be people who would prefer to base their weather predictions on the behaviour of cattle in a nearby field – just as there will always be racegoers who insist on backing the horses trained by the first trainer they see on arrival at the racecourse.

One of the intriguing things about both sport and weather is that the more data that is provided, the more debate there is about the range of outcomes.

When Admiral Robert FitzRoy published his first weather forecast in The Times in 1861, he might have expected sailors to cease examining seaweed and arrange their sailing schedules according to the new pressure-based weather charts. Instead his predictions frequently prompted scepticism and ridicule – with one journalist declaring that, when FitzRoy’s forecast predicted rain on Derby Day, umbrellas could be safely left at home. 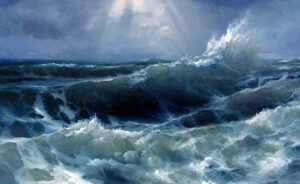 More than 7,000 ships and boats were wrecked off the British coast between 1855 and 1860. Motivated by the loss of 7,201 lives, FitzRoy used the recently invented electronic telegraph to collect real-time weather data from strategic points and send warnings to ports when a storm was predicted. While his alerts saved lives, and his forecasts were quickly adopted by the organisers of garden fêtes and race meetings, they weren’t always correct. His career ended in despondency, leading eventually to suicide.

The use of complex data for weather forecasting has parallels in horseracing. When Phil Bull and Dick Whitford founded Timeform, they created a unique handicapping system by combining Bull’s time based theories and Whitford’s form based approach. While the Timeform ratings service has commanded the respect of punters for nearly 75 years (miraculously achieving a better strike rate than this blog – Saturday’s selection is Battleground in the 2,000 Guineas), it isn’t a foolproof system for finding every winner.

Now the team behind Racing TV are developing an entirely new way of providing data to punters. Over the course of many months, the ‘Course Track’ project has developed tracking systems that enable analysts to study the position of every horse as they negotiate the course, their speed at every stage of the race and their relative position in the race.

Viewers of ITV will have noticed some of the data being displayed during races, showing the time it takes to complete each furlong and the tactics deployed by jockeys as they increase or decrease the pace of a race. Soon we can expect race summaries to indicate which horses display exceptional speed or staying ability – and have the best chance of winning subsequent races. While you might think that such a wealth of useful data would spoil the intellectual exercise of finding winners, I suspect it’s only going to add to the debate.

The forecast say it may rain at Kelso Races next Wednesday, but the cows are lying down – so I think it’s going to be cloudy and dry, with a stiff breeze from the West. We’re hoping the ground will be Good…