So in my dream I discovered that I had died and was standing in the queue for the afterlife, where souls were being divided into two groups…

One group was directed towards an area which resembled a very traditional form of paradise. The inhabitants could kick back and relax on white fluffy clouds, there was limitless access to sweet treats and the atmosphere was suffused with the sound of soft music which emanated from the harps of winged angels. There was complete calm, no tension and no time pressure at all in this vision of eternity. 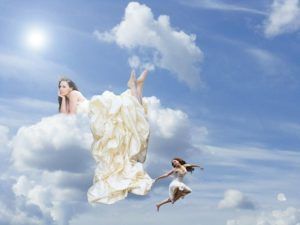 The other group were set impossible tasks. God, it seemed, had grown tired of regulating the Universe and She was particularly tired of listening to the competing prayers of humans: Send us rain! Bless us with sunshine! Please let Manchester United win the Premiership, no let Liverpool win, no Leicester, Norwich City! Make her love me! No, me! Or me! Me! Me! Me!

The second group were obliged to listen to the endless stream of requests from humanity and to adjust the complex matrix of natural forces on Earth in an effort to provide the optimum conditions to satisfy the largest proportion of people: increase the temperature here to aid the harvest; create a gust of wind there to curve the path of a football; produce a quick shower of rain over that street to send these two people scurrying for cover together, such that they might meet and talk for the first time.

The second group’s work was never ending. Looking down on the planet, they witnessed that one person’s dream was another’s ruin – one person’s advancement was another’s reversal. A step back, a step forward. Day after day they returned to their work, liaising with each other and negotiating over the best outcomes for humanity. Occasionally they would have side bets on some of the less predictable outcomes – one might insist, for example, that Starcat would win the Qipco 2000 Guineas at a big price on Saturday.

Meanwhile, some members of the first group were growing restless in paradise. They had all the comfort they could wish for, but they lacked a sense of purpose: there were no actions, no consequences, no jeopardy – only their perpetual reward for having been good people during their lifetime on Earth. They started to think that those in the second group were having a bit too much fun. “It’s not right,” they complained to God. “The sinners shouldn’t be excited and laughing and striking bets.”

“Whatever made you think,” asked God, “that I would entrust my most important work to sinners only? It takes all sorts. Those that you see working before you may argue and bicker – but they have discovered that there is pleasure to be derived from rising to a challenge. Even an impossible one. Everyone enjoys furlough at the start, but it rarely takes more than a couple of months for most people to conclude that it’s really just another form of hell.”