You know that you’ve been invited to a night to remember when, before you’ve even got there, the host sends you a sachet of Alka-Seltzer and a 5cl bottle of whisky for the morning after. That was Thursday’s 10th annual RCA Showcase Awards Night, staged at Hamilton Park.

Northern courses were to the fore with Pontefract (the overall winners), Musselburgh, Hamilton Park, Ripon and Aintree all being recognised. Having won the award for the top jumps-track ground-staff, the Kelso team were there as one of the runners-up for the overall Ground-staff Award – deservedly scooped by the excellent team at York.

Scottish Racing, the collaborative organisation which supports all five Scottish racecourses, picked up the Diversity & Inclusion Award for their partnership with William Hill and Alzheimer’s Scotland to ensure that horseracing in Scotland is dementia-friendly. 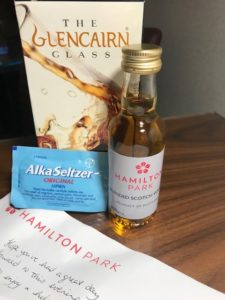 The names of the winners were inscribed on plaques which will be displayed with pride in racecourse offices up and down the country. And it’s helpful that there will be some permanent documentary evidence to commemorate the occasion because each award was presented together with a magnum of liquor, varying from brandy to Champagne, which may have left some of the participants struggling to recall precisely what happened.

That’s in contrast to another event hosted earlier this week at Kelso Racecourse. The idea behind the Racing Reminiscence Day was to gather a group of racing enthusiasts, together with a selection of memorabilia, and to recall some of those great events which are etched into our racing consciousness. Visitors brought old photographs, racecards, scrapbooks and albums. Tea was the beverage of choice, accompanied by lemon drizzle cake and biscuits.

After an hour or so of swopping stories and comparing notes, we settled down to watch a BBC documentary, originally broadcast more than fifty years ago, following the iconic Borders chaser Freddie and the American challenger Jay Trump as they were being prepared for the 1965 Grand National.

In a feat of supreme prescience, the documentary makers had managed to identify both the first and second placed horses as their subjects in the build-up to the race. As we watched the grainy black and white images of the two horses, locking horns for a lengthy duel around the Aintree elbow, we all knew what the final result would be. But that didn’t stop the room shouting for Freddie. We yelled, we cheered, we urged Freddie on. But all to no avail… Jay Trump got home by three-quarters of a length from the Reg Tweedie trained Freddie who, carrying top-weight, was conceding the winner nearly two stone. He was second again the following year.

Horseracing generates so many great memories and one my own favourites was backing Splash Of Ginge to win the Betfair Hurdle at Newbury in heavy ground back in 2014. He’s since won the 2017 BetVictor Gold Cup at Cheltenham on soft ground and, if the weather permits the meeting to go ahead, he’ll be back for more in the season’s first major handicap on Saturday. If he wins again, we could be reminiscing about it for a long time to come – although, at 33/1, we might need some Alka-Seltzer first.