There was much excitement in Berwick-upon-Tweed this week when the town’s harbour welcomed passenger cruise ships for the first time in its history.

Who knows, if sea levels rise, perhaps they’ll be able to cruise up the river to the races – just as they do at Worcester and Windsor. In the meantime, if passengers want to come to Kelso, they’ll just have to transfer by bus. But that idea still has plenty of appeal and I can imagine horseracing cruises becoming very popular… 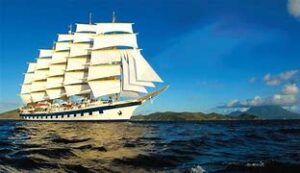 There’d be no need to stop at the south-eastern port of Folkestone because the racecourse at Westenhanger, one of my favourites, closed in 2012. But, depending on the size of the vessel, passengers could disembark at either Chichester harbour, Southampton or Portsmouth for Fontwell Park Racecourse. And then, further along the coast at Teignmouth (where the Crab Shack in Queen Street sells excellent seafood) for racing at Newton Abbot.

While Chepstow could be accessed easily from Bristol, the idea of a racing cruise would really come into its own for visitors to Ffos Las. Opened in 2009, the newest racecourse in Wales is pretty inaccessible to anyone who doesn’t already live in nearby Mynyddygarreg (which isn’t a very large proportion of the British population) – so what better route to take than to approach from the sea and dock your boat at Burry Port. Racegoers can enjoy pancakes from the Foursquare Crêpe Van, reputed to be very good indeed, before moving on to the racecourse.

Anyone who’s been stuck in Bank Holiday traffic on the M6 could be forgiven for thinking twice before heading off to Cartmel from the south. The trick, of course, is to stay the whole weekend and possibly even camp in the beautiful environs of the track – but an alternative would be to take a cruise to Barrow-in-Furness and bypass the motorway altogether.

Racing cruises needn’t be restricted to mainland Britain, a detour to the west coast of Ireland would take us to Galway, where our selection on Thursday is Skyace. Currently trading at 25/1 for the Galway Hurdle, Skyace is trained by a very rare fish indeed – a nine foot giant with red hair who goes by the name of Shark Hanlon.

Berwick-upon-Tweed is England’s most northerly town and one of the cruise ships docking there this week had been obliged to divert from Scotland at late notice, due to the Scottish Covid legislation – but all that seems to be changing now, so it should be relatively easy to take an east coast cruise taking in Dundee (for Perth), Leith (for Musselburgh), and Berwick for Kelso.

Just make sure, if you are on a big red ship, that you don’t crash into a blue one. It’d be a shame to get marooned.