Many years ago I used to go to parties where we played pass-the-parcel; everyone won a prize. Now I go to dinner and it’s followed by a game of pass-the-blood-pressure-monitor where no one wins a prize but we all learn whether we were supposed to eat that last portion of profiteroles with extra cream.

The last time I tried it, which was only a few weeks ago, I was dismayed to discover that I had a blood pressure reading of 260 over 130. Okay, I might be exaggerating slightly for effect, but the lower figure (representing the diastolic blood pressure when your heart is at rest between beats) definitely resembled a number along the lines of what the higher figure (the systolic blood pressure reflecting peak-pump) was supposed to be; the other number was somewhere off the chart.

So I did what most sensible people would do in my situation: I had another glass of red wine, because I’m pretty sure that I’ve read somewhere that red wine is good for you.

The following day I went out and bought a blood pressure monitor of my own. Maybe, I thought, my blood pressure would rise in advance of exciting horse races and fall with the therapeutic delight of making winning selections. All I’d have to do is give up backing losers…

We were fortunate enough to have a 16/1 winner last week, with Flashing Steel, to put the theory to the test. Alas, win or lose, the readings remained stubbornly high. Watching horseracing definitely raises the pulse-rate, but the only activities that successfully reduce my blood pressure seem to involve a glass of wine or a jog around the roads. So I went to the doctor to seek some advice.

“First,” he said (without an ounce of humour) “If you’re self-medicating with wine, you’ve reached the wrong conclusion.” I explained that I didn’t really like the idea of medicating with actual tablets, to which the doctor replied: “Well it’s better than having a stroke.” 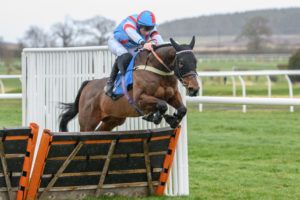 According to figures published by Public Health England, the chances of having a stroke in your 50s is roughly 2,000/1, which I find worryingly low. I regularly string together accumulator bets with larger odds than that on a Saturday afternoon – and of course I expect them to win! This week, for example, many racing fans will be perming all six of Frankie Dettori’s rides at Ascot with cumulative odds of around 6,000/1 – meaning that you’re about three times more likely to have a stroke in your 50s than succeed in scooping the pot by putting your faith in Frankie.

I’ve decided, therefore, to consult my vet instead. I’m going to eat more oats, drink more water and exercise at a steady canter three times a day. If it works for Rouge Vif, our selection for the novice chase at Market Rasen on Saturday, maybe it will work for me too.