Good things come to those who wait and the anticipation of good things is the oil that lubricates horseracing’s engine – whether it’s the Frankel foal in the paddock, the novice hurdler that’s destined for Grand National glory or the antepost betting slip for next year’s Cheltenham Gold Cup.

The optimism of racing enthusiasts is what sets them apart from the rest of society. Because, to a racing person, there is as little as no difference between living in hope and basking in the knowledge of a sure-thing. We’re confident; we’re believers; we have a faith that is not easily shaken by failure. Which explains why, after examining my recent record, I still have the gall to suggest that you follow this week’s tip: Laurens in the Group 1 Lockinge Stakes at Newbury on Saturday.

Fortunately, regardless of the fate of my selection, I really do have a sure-fire winner for you. One that will fuel dreams and fill the heart with anticipation for ten years to come. Something that will generate a unique spirit that can be enjoyed by you, your friends and your family. Literally.

The Borders Distillery is the first whisky distillery to operate in the Scottish Borders since production ceased at Kelso’s Distillery Lane in 1837. Having commenced distillation at the award winning site in Hawick just over a year ago, the Borders Distillery are offering 1,837 casks of spirit for sale to individuals. After three years in casks the spirit can be called whisky and after ten years it will become the sort of nectar that will warm the cockles on the chilliest of National Hunt racedays. 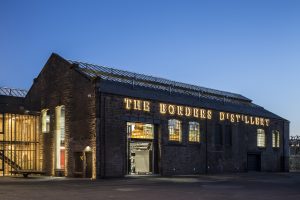 The cost of the cask package, which includes storage for ten years and bottling (but not the Government’s duty which must be paid at the prevailing rate when the whisky is bottled) is £1,950.

To celebrate the distillery’s forthcoming sponsorship of a race on Ladies Day at Kelso Racecourse, the team there have decided to donate £158 to Racing Welfare for every cask that they sell to a racing enthusiast. Racing Welfare is the organisation that helps to look after the long-term wellbeing, both physically and mentally, of people who have been involved in our sport including stable staff.

During the ten-year period of maturation, a proportion of the spirit will evaporate – a dividend to the deity which is known more generally as the “angels’ share”. It isn’t possible, therefore, to say exactly how many bottles will be filled from each cask, but it could be somewhere in the region of 300. If that volume of liquid gold sounds slightly daunting, do not fear. Kelso Racecourse is putting together syndicates to participate in cask ownership and 10% shares will be available at £195 – with £15.80 going to charity.

Size is a relative thing, so it’s difficult to say whether or not good things come in small packages – but they definitely come in barrel-shaped oak ones, that have previously contained Rum, wine, Bourbon or Rye… And they’re definitely worth waiting for.