I had a pony once, who would career forwards instead of standing still. He was a thrill to ride – great fun, although he didn’t win many rosettes in the Family Pony classes at the local shows. Only a pony called ‘Crackles’ would consistently finish in a worse position and that was because Crackles spent a lot of time standing on his hind-legs while his rider rolled around on the floor.

So when the racecourse-backed pool betting enterprise, known as britbet, agreed to a ‘stand-still arrangement’ with the existing Tote, I was reminded of my old pony and decided to gallop ahead regardless!

The intention had been to roll out the britbet branding and equipment, including new display screens and terminals, at almost all racecourses on 13th July this year, when the Tote’s exclusive licence to run pool betting on horseracing in Britain came to an end. This week, however, the britbet Board agreed to maintain Tote branding on the racecourses while negotiations take place to see whether all pool-betting stakes can flow through to a single pool. The outcome, which may not be known until the end of October, is that britbet will either launch at a later date or that the brand may not appear on racecourses at all.

The good news for racegoers is that, regardless of whether the stakes flow through to a racecourse owned pool or a Tote owned pool, the enhanced display equipment is going to find its way on to racecourses sooner rather than later. The transformation will no longer be overnight, but racecourses will seek to transfer to the new britbet-developed equipment during the period reserved for negotiations. Which means that, if an agreement is reached between britbet and the Tote, the new partnership will gain an immediate benefit from the improved set-up on racecourses. 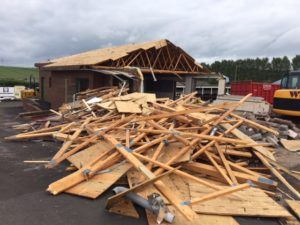 At Kelso Racecourse the end of the Tote contract and the opportunity to introduce new systems precipitated another decision – that we’d demolish one of the least attractive buildings on a British racecourse, the Tote control room and betting shop. The intention is to increase the size of the Parade Ring and Winners’ Enclosure, with the objective of improving the view of the horses for all visitors – horses like High Jinx and Placedela Concorde, both recent winners at Kelso, who are set to clash at Hexham on Saturday. Our narrow preference is for High Jinx, this week’s selection.

The asbestos roof tiles were removed from the betting shop, one-by-one, this week and placed in a specially designated skip. The rest of the building is coming down now. Next week a massive digger is going to start excavating the site, so that our new parade ring is level – cutting into the existing slope to provide space for some tiered viewing steps.

Despite the agreement to stand-still; despite the possibility that the Tote could remain part of the scenery for some time to come, we’re galloping ahead at Kelso. Perhaps, when we’ve created our new Parade Ring, someone will give us a rosette.