I live close enough to the Border that I could reasonably go out to do some essential shopping, cross into England, and then enjoy a nice stroll on one of those beautiful, empty, Northumbrian beaches.

Many of my neighbours are doing just that, now that golf courses have opened up this week. But the advice to my colleagues in Northumberland is very clear: whatever you do, don’t come to Scotland!

The difference between the two nations is actually very small – both are advising the public to be cautious and to stay at home where possible, both are planning to review restrictions on the movement of people from 28th May, both (I sense) would like to be in a position to allow more businesses to open in early June. However, the difference in rhetoric, accentuated by media coverage, is in danger of creating a two-tiered approach to the resumption of horseracing whereby Scottish trained horses may be obliged to travel south of the Border to find opportunities to race. 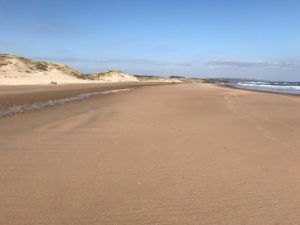 While behind-the-scenes discussions with executives and politicians within the Scottish Parliament have been very positive, the more confident public statements made by the Department for Culture, Media and Sport has inspired the BHA to draft a fixture list for the return of racing that includes English tracks, but not those in Scotland or Wales, for the first eight days. Beyond 8th June, no one is entirely sure what will happen – but the dates will be set very soon.

The oft repeated phrase in the media is that “the politicians are being guided by the science.” I suspect though, that the politicians are mostly being guided by the public: was it not public concern, about a perceived lack of action, that led to both Governments enforcing reassuringly harsh lockdown rules in the first place? And Westminster’s fresh policy seems to reflect pretty much what most people have been doing for the past three weeks anyway – going back to work, getting out into the open air more often, discreetly visiting family or neighbours but sitting in the garden at a safe distance…

The public can be credited with a fair degree of common sense. By and large, they don’t go round to see granny and grandad if they have a cough. Maybe they stay away from granny and grandad altogether. All of that is unarguably very sensible if you wish to protect someone who is vulnerable.

But the time has come to allow people to get on with the act of living. It’s time to recognise that most people actually like to go to work, to feel valued and to earn a crust instead of being fed by the (very generous) Government by means of a long-spoon through the letter box.

Leadership, they say, is difficult because you never know whether you’re being followed or whether you are being chased. I wouldn’t wish to be a leader of a country for any money, but I’m starting to feel less inclined to follow and more inclined to chase…