Having stayed up late watching the election coverage, I’m flagging. Not flag-waving you understand, because there’s been enough of that on racecourses recently. No, I’m feeling tired – mainly of the discussion about using flags and whistles to prematurely halt races.

Following last weekend’s race at Sandown, there’s been a lot of guff talked about flags and whistles being antiquated: that there should be a better way of getting the attention of jockeys mid-race; that technological developments should have rendered them redundant. As if jockeys would take any more notice of an electronic board or a trackside PA system…

I’ll admit that people are just as likely nowadays to use their phones to book a taxi, as flag one down with a sharp whistle from the side of the road. But jockeys are forbidden to use their mobile phones during racing – so that isn’t an option. It wouldn’t be very practical either.

There’s something else I wanted to flag up: flags have been used reliably for hundreds of years in a wide variety of sports. Touch judges and line judges raise them in rugby and football matches when the ball goes out of play. They mark the holes on golf courses and obstacles in the cross-country phase of 3-day events. They are used in motor racing to communicate to the drivers and in sailing to direct the sailors. 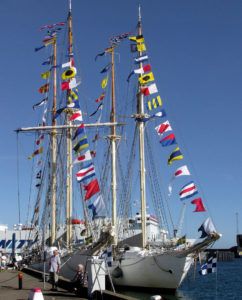 The international maritime signal set of flags, deployed in dozens of permutations, are used to communicate anything to a sailor: from an instruction to stop the race, to notification that the course has changed mid-race. There’s even one to instruct everyone in a boat to put on their life jackets – a sobering thought which illustrates just how important it is for the participants to keep wits their about them, to observe the flags and their meaning for their own safety.

Being a jockey is tremendous fun – otherwise no one would do it – but it is also a dangerous occupation and no one should underestimate the skill with which jockeys are required to assess the risks in front of them second-by-second throughout a race. It is part of their job to spot men with flags standing on the track.

As for the men with flags – being one of them is much less fun. It takes someone very dedicated, bold or stupid to stand in front a dozen galloping racehorses with a flag. It didn’t work out so well for Emily Davison, who probably fits into the bold category, when she attempted to fix a suffragette flag to the King’s horse during the 1913 Derby. Nor was it very good for Harold Hewitt, who fell beneath the hooves of Tracery during the 1913 Ascot Gold Cup while attempting to do something similar. Hewitt is not as fondly remembered as Davison, probably because he carried a revolver as well as a flag and was labelled by the media as a madman. History has therefore filed him under the ‘stupid’ category.

The racecourse staff that run onto the track, on the other hand, are dedicated individuals who deserve support and praise for their efforts. Let’s hope they’re not needed at Cheltenham, where Call Me Lord is our selection for the International Hurdle on Saturday.