At Kelso Racecourse we love our customers, but we don’t ‘luurve’ our customers. Which is why we’re not planning to follow the lead of FC Seoul, the South Korean football team, who positioned sex dolls in the stands to make up for the lack of a crowd while playing behind closed doors last week.

Curiously, the dolls were positioned at wide intervals throughout the stand, so as to ensure that they were socially distanced – although, as far as I’m aware, coronavirus doesn’t affect latex rubber manikins. Officials claimed to be oblivious to the fact that the dolls were sex toys, despite the exclusively feminine-appearing audience sporting headbands that were advertising pornographic websites. 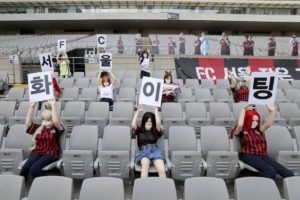 Of course it’d never be permitted at Kelso where, even on Ladies Day, the crowd consists of a roughly even split between the genders and our sponsors are wholesome local companies like Five Star Taxis from Galashiels and The Borders Distillery in Hawick.

Ladies Day, which was originally scheduled to take place this weekend, has been postponed until Sunday 4th October when it will be staged as the second fixture of our next National Hunt season. The Scottish Government is yet to make any firm pronouncements regarding the dates when lockdown measures can be relaxed to allow spectators, but we remain optimistic that we’ll be allowed to celebrate the races with a crowd by the Autumn.

Meanwhile, the preparation for racing at Summer venues continues apace with hopes that there could be racing in England on 1st June and in Scotland later the same month. There will inevitably be a long list of precautions that the racecourse staff will be obliged to consider. While no spectators will be allowed to attend in the first weeks, the few people that are involved will still have to adhere to appropriate social distancing guidelines. Where that’s difficult, some staff will have to wear protective clothing – although rumours that the BHA is ordering specially designed PPE for horses (pictured below) may prove wide of the mark. 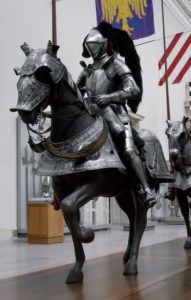 There is also no truth to the rumour, as I understand it, that jockeys will be instructed to steer away from each other on the track. If you spot a jockey dashing out wide from the stalls it’ll be because the ground is better on the far side, not because they’ve forgotten to bring a facemask. And if a jockey eases down before the winning post, they won’t be able to claim social distancing as an excuse – they’ll still be expected to ride to win, even if the official winning distance is only a head.

Needless to say, you don’t have to miss a thing – all of the races will be broadcast live. The Scottish tracks can be found on Racing TV from your own sofa, where you can sit as closely as you like to whomever you choose – even if they are made from latex. It’s your home. No one’s judging.