There really are people that possess extrasensory perception and it won’t surprise you to learn that they are almost exclusively female.

Tetrachromacy probably isn’t quite so useful as telepathy, clairvoyance or precognition. Technically it isn’t even a sixth sense; it’s an extension of one of the five more readily accessible senses, commonly known as sight, but it does enable some people to perceive things in a way that others will simply never experience.

Most humans are trichromats: they have three varieties of colour cones in their eye, each providing the ability to see a different colour range. There are short-wave cones – sensitive to colours with short wavelength light such as purple and blue, there are middle-wave cones which enable us to see shades of yellow and green, and then there are long-wave cones which give us the faculty to see red and orange (and presumably also the ability to listen to the Daily Service and Test Match Special on BBC Radio 4, although it’s possible that I’m getting confused).

Born with the relevant genes on each chromosome, tetrachromats are people who possess a fourth type of cone – containing a photo-pigment which reacts to colours outside the typical spectrum of visible light including shades of blue, indigo and violet. Unfortunately for men, the Y-chromosome isn’t long enough to contain the appropriate genetic information, whereas an estimated 12-20% of women (with their two X-chromosomes) are born with the mutation that enables them to see roughly 100 times more varieties of colour than the rest of us.

All of which, I suppose, could go some way to explaining why Jennie Candlish entered Glenamoy Lad in the Betway Grey Horse Handicap at Newmarket on Saturday. Just because the majority of the population looking at Glenamoy Lad would label him as being bay, there is nothing to say that Jennie doesn’t see something else – maybe blue with ultraviolet flecks. 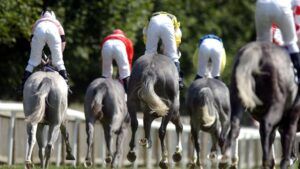 I don’t know what the trainer Jonny Portman’s excuse was – because he entered Quick Breath, who is also recorded by Weatherbys as being bay in colour (for those that are visually challenged, there are additional clues in the formbook – such the letters b.g which stand for bay gelding or gr.g for grey gelding). Either way, both entries for Saturday’s race had to be expunged because the unique conditions for the race stipulate that the runners have to be grey in order to participate.

Our selection for the race, one of my favourites in the flat-racing calendar, is Clareyblue – whose name suggests that his owners might see something in his coat other than pure grey. Given the similarity in the colouring of all the runners, you’d be best to identify him in the race by the jockey’s silks which are black and white. Or at least that’s how they appear to me – it’s wise to check the diagram in the race programme. It’s possible you’ll perceive them as red, green, pink or purple…