Whether you agree, or disagree, that it was essential for Boris to visit Scotland this week will probably depend on the strength and flavour of your politics. But it’s interesting to note that there is a long history of border tensions at times of increased pestilence.

In 1348 the Black Death reached Britain, just as Coronavirus did in 2019/20, through the country’s main global transport hub. Only in those days it wasn’t called Heathrow, it was called Bristol. According to Henry Knighton, a chronicler of the time, “… almost the whole strength of the town perished.” The plague spread quickly to London, Parliament was prorogued and bodies at the Smithfield cemetery were stacked five deep.

Knighton notes that, in 1349, “The Scots, believing that the English were overwhelmed by the terrible vengeance of God, gathered in the forest of Selkirk with the intention of invading the whole realm of England. The fierce mortality came upon them, and the sudden cruelty of the monstrous death winnowed the Scots. Within a short space of time, around 5,000 of them had died, and the rest, weak and strong alike, decided to retreat to their own country.” Needless to say, they took the plague home with them.

Somewhere between 30-45% of the population of the United Kingdom (as we know it now) died between 1348 and 1350, which is a sobering thought when you consider that the current death toll after a year of Covid is just under 0.15% of the population. Nevertheless, it’s no wonder that we harbour heightened suspicions about travelers at times like these – each of us will have our own internal risk register, letting us know whether an ‘essential activity’ is truly essential.

Here’s my short list of things that aren’t essential during this pandemic:

– The posting of Political leaflets, of any persuasion, through my door. The only letters I receive nowadays are council tax notifications and electricity bills, so why force the poor postie to risk tramping from door to door for any other reason?

– Transporting coconut, in any form, to Supermarkets. It’s just not necessary. In fact it’s horrible – risking life and limb to deliver vomit inducing Bounty Bars and inedible varieties of breakfast cereal to the nation. The same goes for rice pudding, semolina and anything flavoured with almond essence. 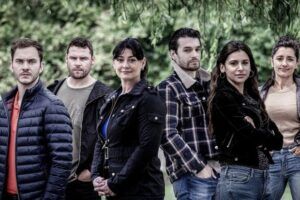 – The production of soap operas including: East Enders, Emmerdale, Coronation Street, River City and the Archers. Once you’ve witnessed a few episodes, they’re all repeats (although I must admit, I never tire of hearing Nigel fall off the roof).

– Television adverts for Canesten cream. At least not when I’m eating my tea.

Among the very few entirely essential activities, that I hope all readers of this blog can agree on, is horseracing (this week’s selection is Lemon T in the first race at Doncaster on Saturday). Not only does it help fuel the rural economy in a safe and socially distanced way, it also gives us something to look forward to.