There’s no blog this week on account of the fact that I’m away on holiday.

I’ve shelved the shoes in favour of sporting sandals. Not because they’re very much more comfortable on sun-kissed sandy beaches, but because I’m padding the streets of Central London and I think there’s a small possibility that, while visiting the museums and galleries, I’m more likely to get mistaken for an intellectual if people can see my socks.

The new hat could be a giveaway – it doesn’t actually say ‘Kiss Me Quick’ on the front, but no one but tourists, beat-box artists and Orthodox Jews wear hats in London. And few people are going to mistake me for a beat-box artist in my new black Trilby.

The exchange rate has become less and less favourable for foreign travel since the result of the leadership election was announced, which is as good a reason as any to opt for a stay-cation. It’s also a very good reason for not going to Paris to watch Enable win a third Arc on the first Sunday in October, but to watch the wonder-mare from Kelso instead, where we’ll have some great jumping action including Simply Ned’s intended seasonal debut.

Like most Brits on holiday, we’ve behaved in ways that we’d never dream of behaving at home: we’ve played with electricity at the Science Museum, we’ve drawn on the walls at the Natural History Museum and we’ve thrown toys at each other in Hamleys. All activities which we wouldn’t condone on a racecourse, but which were encouraged by the fine staff at these illustrious London institutions. I certainly haven’t had any time for writing a blog. 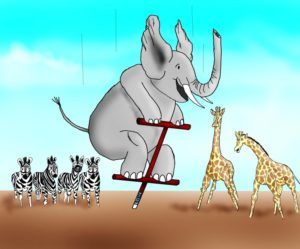 Having seen dozens of skeletons, including some that once belonged to dinosaurs, blue whales and woolly mammoths, I’ve learnt why it is that elephants can’t jump – which explains, in turn, why it is that we race horses instead. It’s so good to know that another one of life’s big questions has been answered.

I’ve walked passed Boris Johnson’s new home, although ironically he was in Scotland at the time. I stopped and stared at the soldiers outside Buckingham Palace, although I didn’t see the Queen who was probably too busy enjoying the racing from Goodwood (where Khaadem is expected to win the Stewards Cup on Saturday). Or more likely Galway, because the programme there includes jump racing which is much more exciting than flat racing and specifically excludes elephants – for a number of technical reasons which anyone who’s visited the Natural History Museum could probably explain.

But I just haven’t had the time to write a blog. Very sorry. Back next week.