I love deadlines. I like the whooshing noise that they make as they fly by.

But sadly the season for missing deadlines has passed and we’ve reached that point in the year when we have to start hitting them – like clay pigeons scything through the air. Bam, bam, bam. The first day of the 2019/20 season at Kelso Racecourse is scheduled for Tuesday 10th September and it has to happen, come what may.

Among the duller and more po-faced quotations about ‘deadlines’, produced by a quick Google search, is the idea that: ‘Deadlines are the difference between dreams and goals’. But while it’s true that a looming deadline adds a degree of pressure to get things done, I find that dreams are motivational enough.

I have rather a lot of dreams. There are ones about building new grandstands, weighing room facilities and hospitality areas for racehorse owners. And ones about planting Spring bulbs, flowering shrubs and magic money trees. All of those dreams are motivational and will stimulate activity over time, but the one that concentrates my mind the most is the one where I’m standing in the Parade Ring on a raceday and realise that I’m wearing my pyjama top and nothing from the waist downwards. 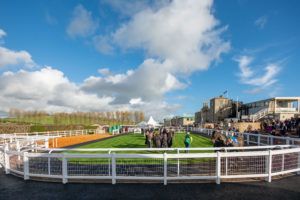 Such behaviour would obviously land me in trouble with the Stewards, because it’s just not acceptable to scare the horses in this way. But that’s not the point that motivates me. No, my Big Book of Dreams says that nakedness in a dream denotes a fear of being exposed. In other words, my dream reveals the deeply rooted and habitually disguised fear that, when the horses and the public arrive on a raceday, they’ll discover that the racecourse isn’t ready to accommodate them.

Hence the flurry of activity at the racecourse this week. The track is in perfect condition and passed its pre-season BHA inspection with flying colours. The enclosures in the meantime, resembled the film-set of a disaster movie at the start of the week. Having folded some small buildings into a skip during August, we’ve been painting, cladding and resurfacing, cleaning, polishing and tidying – all to create a modicum of additional space and comfort for racegoers on the opening day.

Another dream that I have is one where I’m biting into a delicious Kelsae Yorkie – consisting of a roast dinner wrapped in a Yorkshire Pudding and presented in a biodegradable (eco-friendly) cone so that it can be devoured while standing on the viewing steps of the Parade Ring watching Ardglass Star (our selection in the first race on Tuesday’s card). But before I get my bite, I lose a tooth, then another and another…

The dream about losing teeth is about knowingly telling lies. It’s about all those people who merrily ask, “Are you ready for racing?”

I try to answer, equally merrily, “Yes of course. See you on Tuesday!” while speaking up to cover the noise of the angle grinders and tarmacking machinery…

The truth is, of course, that we’re not ready for racing at all. But we will be on Tuesday!