Sherri is the lovely lady who coordinates marketing activities at Kelso Racecourse. If you’ve been to the races during the past couple of years, you’ve probably seen her in the Winner’s Enclosure, taking photos with her phone and posting them to social media.

She’s the least likely person I know to start a fight. So when she told me that she’d been punched in the face while visiting the Goffs sales ring at Doncaster, it made me a bit anxious about going there myself. While we very occasionally hear about rowdy behaviour in horseracing, it’s more something that you might expect to encounter on the terraces at football grounds or on the pitch during rugby matches.

Anyway, it turned out that Sherri gave as good as she got. The steep steps surrounding the sales ring make it the perfect venue for charitable boxing matches. Having accepted the challenge to participate in a bout to raise funds for Racing Welfare, Sherri set about pummeling the opposition into submission and won on points. 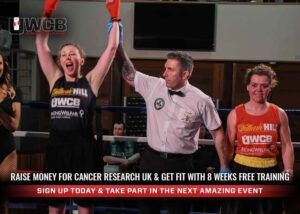 I didn’t witness anything so violent when visiting Goffs this week, which is a shame because there was a competitive crowd of racing people in attendance. Who wouldn’t have enjoyed watching Cartmel-based trainer Jimmy Moffatt challenging Kelso neighbour Sandy Thomson?

Or an all-Irish bout between Shark Hanlon (who trains this week’s selection – Knockwilliambridge at Kilbeggan on Saturday) and Gordon Elliott. Or, for that matter, the Catterick Racecourse Manager Fiona Needham against the Kelso Racecourse Manager? Except of course I’d never hit a girl, even with boxing gloves on, so Fiona would have had to challenge Liz (another Kelso raceday worker) who attended too.

But there were no fights, not even any arguments or disputes among the many jockeys, trainers, owners and breeders that were present. All we did was watch the horses in the sunshine, drink coffee and eat ice-cream.

A trip to the sales has to be one of the best days out in racing. And unless you wave at the auctioneer (which I nearly did because he lives near Kelso) it’s completely free too. There are hundreds of horses of all ages, shapes and sizes – all being trotted-up and shown-off to prospective bidders. There’s plenty of tension and excitement (for those that want it) in the sales ring and relaxed chatter outside as friends compare notes about the lots that they bought, as well as the ones that got away.

Wednesday at the Goffs Doncaster Sale was one of those beautiful warm Summer’s days when most people wouldn’t consider lifting a finger – not least because lifting a finger at the wrong moment could cost quite a lot of money. In the end I came away without buying a horse, which was a shame. But at least I didn’t get punched in the head.