If you’re reading this blog, the chances are that you have a favourite horse. It might not be a racehorse, it may not even be a real horse – but I feel pretty sure that you’ll have one.

Perhaps it is a horse or pony that you once owned, or a horse that you were once allowed to ride. It might be an artist’s impression of a horse – the painting of Whistlejacket by George Stubbs, which hangs in the National Gallery, is pretty striking. The four bronze Horses of Helios who prance in the water fountain at 1 Jermyn Street, near Piccadilly Circus, are difficult to overlook too – although if you look up, you’ll notice that they are in fact overlooked by three, rather striking, golden girls who appear to be diving off the roof of the building with no clothes. 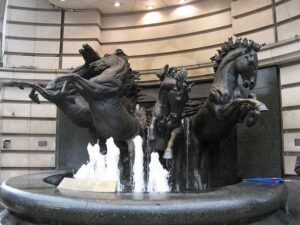 For a long time my favourite was the Little Wooden Horse, the creation of children’s author Ursula Moray Williams, whose quest to raise funds for his maker (poor toymaker Uncle Peter who struggled to compete with the manufacturers of mass-produced plastic toys) led him from one perilous situation to another.

While the Little Wooden Horse was a dutiful servant, he also had a bit of attitude, he was unafraid of hard work and in possession of a huge heart – just a few of the characteristics that I’ve come to value in real horses that I’ve seen on the racecourse (like Vulrory’s Clown, placed fourth or better in 48 of his 57 career starts; or Not So Sleepy who is not-so-dutiful, but all freakish attitude and plenty of heart).

Next week is National Racehorse Week and the racing media will be full of stories about great horses, past and present. One of them could be Tommy’s Oscar, our selection for the Weatherbys Hamilton Handicap Hurdle on Wednesday at Kelso, our first fixture of the new season – when we’ll be demonstrating our appreciation for the most honourable creatures at the racecourse (that’s the horses, not the bookmakers, punters or BHA officials) in traditional fashion. Where we’d normally present the winning horse of each race with a large bag of carrots, next week we’ll be giving carrots to every single runner. 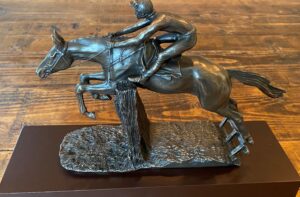 We’ll also be launching the ‘Shades of Midnight’ Horse of the Year Award – for the horse which puts up the most stirring performance or performances at Kelso during the 2020/21 season. The bronze award, donated by the owners of ‘Shady’ (the winner of seven races including three at Kelso) will go to the owners of one outstanding horse that will be selected from a list of nominations made by racegoers. The lad or lass of the horse will also receive £200, which they may or may not spend on carrots for their favourite horse.