It’s surprising what you can find when you look in the hedgerow. Edible flowers, herbs and wildlife – including the occasional fallen rider.

The third week in July is Kelso’s Civic Week and on Tuesday several hundred horses passed through the square, trotted up Roxburgh Street and cantered through the main car park of Kelso Racecourse before heading off to Ednam where they rested in a field equipped with a full bar and plenty of refreshments. 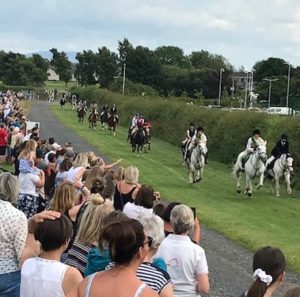 Some of the riders are more used to being on horseback than others, while some enjoy more refreshment than others – which is how at least one of them came to be rolling in the hedgerow later on. Large crowds of well-wishers lined the lanes and I wasn’t the first in line to offer the rider a leg-up back into the saddle. But I was close enough to notice that the rider had flattened a small patch of meadowsweet – the faint aroma of almonds and hay emanating from the crushed, cream coloured flowers which are good for making herbal teas and cordials.

And behind the meadowsweet, spraying in all directions above the hedge, were the long, lush sprouts of an Elder tree which had been knocked back by the hedge-trimmer last year. Hanging on the ends of each branch were the last few creamy coloured bunches of elderflower – so much later flowering than in the south of the country and excellent for making a delicious cordial to accompany a picnic at one of the future ride-outs… Or at Cartmel races over the weekend, where our selection is Lovato who is the ride of Bryony Frost in the Banks Lyon Jewellers Lady Riders Handicap Hurdle.

To make the cordial, steep 40 or so heads of elderflower in a syrup solution made from roughly 2kg of sugar and 2 litres of water. Zest a couple of lemons, slice them and throw the whole lot into the syrup together with 85g of citric acid. Leave for 24 hours and strain, after which it can be used straightaway, diluted with sparking water.

But if you’re hoping to win the award for the most stylish picnic or BBQ at Cartmel races, you might have to go a step further than simply making your own cordial…

On my way to Musselburgh Racecourse last week, I spotted a roundabout covered in borage and stopped to pick some because the star-shaped blue flowers are deliciously sweet when placed in a salad. The delicate petals also make a luminously attractive garnish when sprinkled at the last moment on the top of your elderflower pressé – which is a great drink for the nominated driver in your party, or as an alternative to alcohol if you feel the need to be abstemious. Like, for example, if you want to avoid falling in the hedgerow on your way home.