Excitement builds across the nation as Derby Day approaches, not least because we’ll finally get to know what colour the ties, ribbons and rosettes will be for the Langholm Common Riding.

If you think the street parties for this weekend’s Jubilee are a big deal, they’re nothing in comparison to the celebrations that take place in each of the border towns every Summer. There’ll be bunting, parades and road closures; sporting events, dancing and ceremonial snuff taking. In several of the towns there’ll also be horseracing – just not the sort that takes place under BHA rules.

At Langholm, a little way along the A7 on the route from Carlisle to Kelso, the festivities trace their origin to the ancient practice of marking the bounds of the common land. Certain elements of the Common Riding remain constant; four emblems will be held aloft and paraded through the town: a spade (for cutting sods of turf at different places on the common), a gigantic thistle (for Scotland), a floral crown (possibly a symbol of loyalty to the Sovereign), and a salted herring which is nailed to a bannock on a wooden platter (don’t ask me).

But the colours sported by the Callant, who leads the parade, and his followers are different each year – dictated by the silks of that year’s Derby winner.

I don’t know what colour tie the Callant wears if there’s a dead-heat in the Derby. In the old days the owners of the dead-heating horses could opt to share the prize or have a run-off. The last time this happened was in 1828 when, following two false starts, The Colonel dead-heated with Cadland. 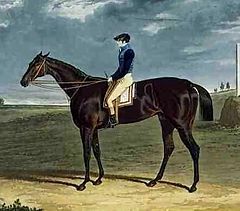 The rematch was staged, over the same course, later that same afternoon. According to The Sporting Oracle, the atmosphere was one of “concentrated and absolutely astounding excitement”. But while The Colonel’s jockey was “nervous almost to the point of agitation”, Cadland’s jockey Jem Mason was calm and collected, pausing to take a pinch of snuff before mounting. (Despite being born in Suffolk, perhaps Mason had family roots in the Borders?)

The Sporting Magazine reported that “Such a Derby was never before seen and possibly never will again.”

The result was a narrow victory for Cadland whose colours, incidentally, are not dissimilar to those that will be worn by Jason Hart aboard Royal Patronage – our each-way selection for the weekend. While it’s difficult to see why Royal Patronage should reverse recent York placings with Desert Crown, the latter is a skinny priced favourite, whereas our selection looks likely to start at a generous 25/1.