It’s a tough job, but someone had to do it: on Wednesday it was racing at Kelso, Thursday a trip to the local brewery…

Horseracing is an inherently sociable pastime and one that has enjoyed an historic association with alcoholic lubrication. Indeed, the first races to benefit from commercial sponsorship were the Whitbread Gold Cup and the Hennessy Cognac Gold Cup in 1957 – two of the most competitive handicap steeplechases in the calendar. The Mackeson Gold Cup was added to Whitbread’s portfolio of sponsored races between 1960 and 1995.

The beneficiaries of Whitbread’s sponsorship weren’t restricted to the owners and trainers who shared the prize money. Mandarin, who finished runner-up in the first three runnings of the Whitbread Gold Cup, was granted two bottles of Mackeson Stout per day, for life, by the sponsor’s Chairman, Colonel Bill Whitbread – a former amateur jockey who had ridden twice in the Grand National and who was moved by the horse’s gutsy performances. 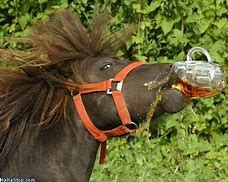 Mandarin, who had been unfurnished and angular as a four-year-old, was a picky eater. None of the usual sweeteners, like sugar beet or molasses, could tempt Mandarin to eat his feed. But the addition of Mackeson Stout worked a trick. Mandarin ate up and developed into a mighty steeplechaser, winning the Hennessy Gold Cup twice (including the inaugural running), the King George VI Steeplechase twice and the Gold Cup once. His final victory came in the Grand Steeplechase de Paris at Auteuil in 1962, when Fred Winter famously steered him around the twisty course without the benefit of a full bridle after his rubber bit snapped in half at the third obstacle.

Whether there are racehorses that thrive on Belhaven Best I can’t tell you, but the team at Belhaven have been passionate supporters of horseracing for a large proportion of the 300 years that the brewery has been in existence. Next month the feature race at Kelso will be renamed the Belhaven Brewery Handicap Steeplechase. It’s a £40,000 handicap chase and it regularly attracts a quality field including the Grade 1 winner Simply Ned – who will be making his seasonal debut.

Having sealed the new sponsorship agreement, the Belhaven team were kind enough to invite me to their 300th birthday celebrations on Thursday. The brewery is based on an ancient site beside the sea in Dunbar, where monks used to brew beer for the local community. The newly refurbished bar at the brewery is known as the Monks’ Retreat and visitors who tour the brew house can sample the full range of Belhaven products there. But you don’t have to manage a racecourse to get on a tour – there are regular opportunities for individuals every week and groups can easily be accommodated with a little bit of notice.

This week’s selection is Arecibo in the William Hill Ayr Gold Cup on Saturday. I don’t know whether Daniel Tudhope’s mount drinks beer, but if he wins I’ll be celebrating with a pint of Belhaven Black.