I am nothing if not a traditionalist, so when the former top jockey Ruby Walsh suggested that horseracing should change its race times from five-minute intervals to eight-minute intervals, I allowed myself three minutes of private outrage – until I realised just how much more productively I could be spending my time.

In three minutes there’d be time to make a cup of tea, although not enough time to watch the kettle – because we all know that a watched kettle never boils: it would be a shame not to get to the stage where you actually pour the water onto the teabag.

There’d be time enough to microwave a meal – or  even to toss a salad if you were looking for something healthier. In three minutes you could clean your shoes, press a shirt or brush your hair. Just think how much smarter we could all be!

It’d be enough time for a bit of form study: easily enough time see that Vintage Clouds and Jonniesofa, who are both intended runners at Kelso on Saturday, were rated as equals three years ago at the novice hurdle stage of their careers. Following an injury interrupted career, Jonniesofa has been brought along steadily and is now rated 14lb lower than his rival over fences – which might lead some to underestimate his chances in the Paxtons Exclusively Kverneland Handicap Chase.

Ruby Walsh, who is now a respected TV pundit, reasoned that it can be difficult for racing enthusiasts to follow all of the day’s racing action when races are scheduled to take place at different tracks every five or ten minutes. A three-mile chase usually takes about six minutes to run, which means that the finish can occasionally overlap with a race elsewhere.

Why not, he suggested, stagger the race times in Britain and Ireland every eight minutes so that, for example, they might be run at 2.00; 2.08; 2.16, 2.24. The racecourse that staged the 2.00 could then stage its next race at 2.32, creating a thirty-two minute gap between races at that track, instead of the more usual thirty or thirty-five minutes.

Mathematically, this could work well when there are four fixtures staged within the same afternoon session – although it wouldn’t work quite so nicely when there are six fixtures, as on Saturday. The race-times departments at BHA and HRI have cleverly scheduled racing at Kelso, Leopardstown, Newbury, Doncaster, Cheltenham and Galway with five minute gaps between most races, with no clashing off-times. 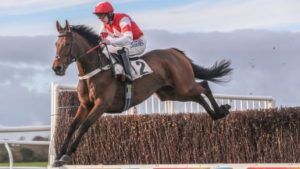 But if Kelso staged the Paxtons Exclusively Kverneland Handicap Chase at 2.58 instead of 3.00, it might be more certain that you could enjoy the pictures of Jonniesofa (our selection for the weekend) battling up the straight before enjoying the Listed Knockaire Stakes from Leopardstown at 3.05 on Racing TV.

There’s a lot that you could do with an extra three minutes and I’m starting to come around to the idea. Above all though, I’m looking forward to Sunday morning when the clocks change and I can have an extra hour in bed.