However, according to Jordyn Smith, all you need to become a Junior World Champion in Taekwondo is red hair. The Falkirk based 17-year-old, who has just won a gold medal in Tunisia, was initially taken to Taekwondo training sessions at the age of four because her father was concerned that she might get picked on because of her hair colour.

I’m not sure that I understand the prejudice – is it because red-heads are among the kindest, most attractive and intelligent of people on the planet? (Can you tell that I’m sitting in an office with one right now?). But prejudice there is perceived to be – so I’m wondering why there aren’t more red-headed World Champions – like people who had to learn to run really fast to avoid the bullies who chased them around the playground, or boxers who might knock you flat for mentioning a likeness to Duracell batteries.

Within our own sporting sphere, would Sam Twiston-Davies have ridden as many winners if he’d be born with brown hair? Maybe he’d have won more, because Brian Hughes has brown hair and he was crowned the Top Northern Jockey in a ceremony at the Perth Festival this week. Brian, who has ridden 140 winners this season including 113 at northern racecourses, was presented with a cheque for £5,000 and a nice montage of photographs. I’m sure it is the photos he’ll value most of all. 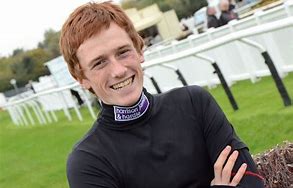 Of course Brian Hughes is no stranger to racegoers at Kelso and Cartmel; he was the top jockey at both racecourses last season. The 32 year-old has won £1,405,897 of prize money this season, although not all of it came from Cartmel and Kelso. And of course most of it is retained, not by the jockey, but by the owner of the winning horse.

The new season at Cartmel is just around the corner, commencing on Saturday 26th May – the day before Kelso’s last fixture of the 2017/18 season, Ladies Day on Sunday 27th May. Confusingly, the start and end dates of the Kelso season don’t quite tally with the dates set by Great British Racing for the jockeys’ championship. The last day of the ‘official’ jumps season is this coming Saturday when Brian Hughes will probably be riding at Sandown. He won’t be crowned the Champion Jockey because there is no way that he’ll be able to ride an additional 32 winners before the end of the week. That’s what it would take to equal Richard Johnson’s tally – the 40 year-old jockey from Herefordshire with light brown / fairish hair.

Richard Johnson has ridden further than 2,140 miles this season, in 875 races with a winning strike rate of 19%. He has a minimum riding weight of 10-stone (including the saddle), which sounds a lot like dedication.

Even so, dedication won’t be enough to win the final big race of the season. If you want to be the best, if you want to beat the rest in the Bet365 Gold Cup at Sandown, you need to be riding this week’s selection Blaklion – like Sam Twiston-Davies – because red hair is what it takes.