While Stephen Hawking was obviously quite a clever chap, I’m sorry to reveal that some of his theories were deeply flawed.

Take, for example, the party that he threw for time travellers in 2009. Apparently the world renowned physicist hosted a lavish event, complete with Champagne and canapés, before sending out an invitation which read: “You are cordially invited to a reception for time travellers hosted by Professor Stephen Hawking, to be held in the past, at the University of Cambridge Gonville & Caius College, Trinity Street, Cambridge.” 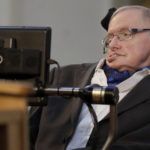 The theory was that one or more time travellers would find the invitation in the future and travel back to 28th June, 2009 in order to demonstrate that time travel is possible. Unfortunately no one turned up, suggesting that time travel isn’t possible after all.

But let’s be honest, if you’d developed the technology to travel through time, how high on your list of priorities would a Champagne reception be? And knowing that there weren’t any other guests, because you’ve already learnt all about the party on the internet, would you really be that keen to attend?

In fact, time-machines being quite expensive, isn’t it more likely that you would travel through a worm-hole to a decent sporting event and use your knowledge of past results to raise funds to pay off the enormous debts that you’ve incurred? And where better to place a large bet, than in the ring at the Cheltenham Festival?

Funnily enough, I was talking to a time-traveller at Cheltenham on Wednesday. I know that he was a time-traveller, because there’s no other way that a person could have selected Bleu Berry, Topofthegame and Barra to fill the first three places in the Coral Cup Handicap Hurdle, paying a Tricast dividend of £2,999.16 to a £1 stake.

Apparently Friday’s big field for the Cheltenham Gold Cup creates the perfect market for an inconspicuous time-travelling punt. “Wouldn’t you rather attend a Champagne reception with Stephen Hawking?” I asked.

“And risk blowing my cover?” the time-traveller replied. “Only once.” He said. “But I haven’t made the same mistake again, in any of the billion parallel universes that I’ve visited since.”

So, there you have it: time-travellers do exist, but they’d prefer to visit Cheltenham than Cambridge. And in case you wanted to know, Might Bite won the 2018 Gold Cup, followed by Definitely Red and a fast finishing Saphir Du Rheu – who pipped Double Shuffle and Total Recall on the line. Or I might have mixed that up a bit to protect the time traveller’s cover-story.

Either way, Sir Jack Yeats is the winner of the St James’s Place Foxhunter Steeplechase. The winner of a Kelso Hunterchase last month, Sir Jack Yeats is next year’s selection for this week’s blog – he’ll be running in the race that usually follows the Gold Cup, depending on which direction you’re travelling in at the time.