The Government frowns on the use of damp wood and smoky fuel in domestic properties because they create microscopic particles, called PM2.5s, which are small enough to pass into the bloodstream and cause health issues. So it’s a good job that all of the furniture that I hacked to pieces to keep warm this week was completely dry.

Some of the flames were unusual colours, beautiful blues, purples and greens – which probably suggests that the lacquer contained something noxious. Or maybe that I threw one of the dogs on the fire by accident; it was pretty dark without any lights, so it would’ve been difficult to tell. On balance though, I’m glad that I didn’t freeze to death in the wake of Storm Arwen – even if it means popping my clogs from a lung-related health complication in two or three decades’ time.

The name PM2.5 relates to the size of the particles which are smaller than 2.5 micrometers – roughly 30 times smaller than the width of a hair and as invisible as my dogs in a power cut, but less noisy if you step on one. The Government would like us to burn only dry and smokeless fuels in the future to avoid creating them and, while I’m sure that would be sensible, perhaps it is also time that they ensured that every property was built with a decent solid-fuel stove so that we’re not reliant on bits of wire strung from pole to pole across the country.

Despite the disruption which has lasted for days, the electricity-network teams are absolutely heroic. Nothing would induce me to go out in the freezing darkness to fumble with live power cables and, with so few daylight hours, they’ve done an amazing job to get so many properties functioning again. The local roads and tracks have been littered with trees and clearing them must be like playing an enormous game of pick-up-sticks – but with bonus points if you move two at the same time. 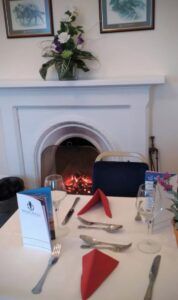 Fortunately, the damage incurred at the racecourse has been relatively minor – we’ve lost a bit of cladding from some buildings, pieces off roofs, a few fence panels here and there and quite a few signs. Some small open-sided marquees, designed to give cover to racegoers who’d prefer to stay outside, were turned inside out. We don’t anticipate any issues for racing on Sunday, when our selection is Big River in the Lilburn Estate Scottish Borders National.

A six-time winner at Kelso, only once has Big River failed to finish in the first two from nine starts at Kelso – when brought down in this very race two years ago.

It’s forecast to be a chilly day, so wrap up warm if you are coming to the races. The fires in the Old Stand will be lit as usual, including the cosy one in the bar at the top of the spiral staircase. And if you remember to wear a face covering at all times indoors, as per the Government’s Covid legislation, you’ll have some additional protection against particulates too.