There’s no such thing as bad weather, just the wrong type of racing.

Today, with Storm Eunice approaching, we thought we might take the first steps at Kelso towards the ‘White Turf’ racing model that’s been pioneered in St Moritz since 1907. There, in the Swiss resort on the southern slopes of the Alps, an innovative Clerk of the Course decided it might be a bright idea to lay out a track on the snowy surface of the lake.

There’s no jump racing there, which might be considered a bit boring under normal circumstances, but the addition of ice and snow more than compensates. In some of the races, instead of riding on top of the horses as is the convention in Britain, the jockeys are towed along behind on skis. Crowds of up to 9,000 gather for informal hospitality among gourmet food stands and retail outlets selling some of the World’s most expensive watches, fashion gear and ham sandwiches. 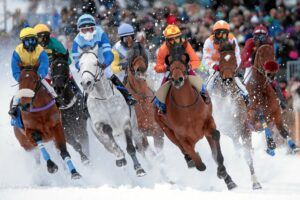 The stewards at St Moritz don’t have to worry about abandoning if it snows. There was however a scare a few weeks ago when an inspection of the track revealed that the lake wasn’t quite frozen enough to take the weight of the horses. That’d be problematic for a Clerk of the Course – the going at Kelso can get heavy in the depths of Winter, but we’ve never actually lost a horse below the surface of the racecourse…

But where there’s a will, there’s a way. The solution at St Moritz was to reduce the length of the track and shorten the races.

Faced with more storms like Eunice, we might have to change some of the ways that we race too. One idea is that instead of riding on saddles, or Skijoring like they do in St Moritz, we could try flying the jockeys like kites behind the horses. I’m sure they could reach an impressive height, it would slow the horses around the bends and they probably wouldn’t need to race over such long distances. The rain softened ground would also provide a nice soft landing.

Perhaps I’ll ask the nice people at Middleham Park Racing what they think. Having scored with Mordred on the Swiss snow last week, and the appropriately named Ain’t No Sunshine in the final race at Kelso in the driving sleet and gales this afternoon, they seem game for anything.

However, we won’t be adjusting the race conditions for the Bet365 Morebattle Hurdle just yet. We’ve saved a special strip of lovely green turf for the £100,000 hurdle race, to be staged at Kelso in two week’s time, which hasn’t been raced on since last May. The 36 entries include the former Champion Hurdler, Buveur D’Air, as well as local hero Tommy’s Oscar who could attempt to win the £100,000 bonus for following up a win in the Bet365 Morebattle Hurdle with a win in the Champion Hurdle at the Cheltenham Festival.

The weather will have improved by then – so book your place now for Saturday 5th March!

If Storm Eunice passes quickly enough, the selection for this weekend is Waiting Patiently in the Ascot Chase on Saturday.