We staged a two horse race at Kelso last week and there were a quite a few people in the country who didn’t like the result. It was something to do with the fact that the horse everyone assumed would win at the start, wasn’t the same horse that won at the end. Maybe, if we ran the race again, we’d get a different result.

There’s a risk, of course, that the people that backed Captain Redbeard, the horse that won the two-runner Malcolm Jefferson Memorial Handicap Steeplechase, might not be happy with the idea of a re-run – they’ve already collected their winnings at the bumper price of 9/2. There were many people like that on the racecourse because Definitely Red was odds-on and relatively few racegoers fancied risking £5 to try and win 83p. 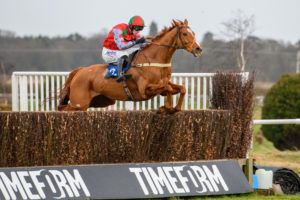 And that’s Brexit all over. Staying in the EU is a bit like backing the odds-on favourite – dull and relatively low risk, which is not the same as saying no risk at all.

Leaving the EU is more like backing the outsider – much more exciting and significantly higher risk. There’s a possibility we’ll lose our stake money, which doesn’t mean that the same old sun won’t rise in the morning and the same bright stars won’t welcome us home. Britain will remain our home and the potential rewards will be worth getting out of bed for each day.

No matter how many MPs want us to do so, there’s also a complication about running the two-horse race again – in that it could end up happening too close to the Gold Cup on 15th March and the Grand National on 6th April, the respective targets of Definitely Red and Captain Redbeard. Whichever horse punters have backed, where’s the sense in re-running a referendum when we could be getting on with the job of seeking the bigger prize?

Unlike Brexit, which isn’t particularly riveting and receives incessant media attention, the Malcolm Jefferson Memorial Steeplechase was a truly fascinating event and has been almost completely overlooked. There may only have been two runners, but, as they went hammer and tongs up the straight, it put me in mind of the epic duel between Desert Orchid and Panto Prince. Definitely Red was giving his conqueror 10lbs in the sprint to the line and put up a great fight. It’d be no surprise to see him run well at Cheltenham.

Sam Coltherd rode an enterprising race aboard Captain Redbeard and proved that having a clever strategy can pay off; the pair are worth following at Aintree. On reflection, Kelso’s two-horse race may turn out to be the best trial over fences this season, so let’s not try staging it again. Perhaps it’s better to keep hold of the whip…

This weekend’s selection is Double Shuffle at Kempton.