Alice was beginning to get very tired sitting on the bank and having nothing to do but listen to an angry Garry Richardson harangue the representative from Ascot Racecourse on Radio 4’s Today Programme. “What is the actual point in running Royal Ascot behind closed doors? What is the point?” he was barking.

What is the point, wondered Alice as she leaned back in the grass, of a book with no pictures… or a Royal Meeting without a crowd?

The man from Ascot said they were going to lose money this year and the angry radio presenter interrupted again: “Well then, that seems a complete nonsense to run something where you will be putting people’s lives possibly at risk. I mean, how can you guarantee social distancing for anyone working at Ascot.” On and on the man ranted until his nose started to twitch, he checked his pocket watch and hopped down the rabbit hole. Alice thought it best to follow, although she had no idea how she was going to get back.

And then she found a bottle with a label marked with the words ‘Drink Me’. I’m not silly, thought Alice, it could contain bleach! So she looked on the bottle for a warning that the contents might be poisonous before tasting a small sip. She was relieved to discover that it had a mixed flavour of cherry-tart, custard, pineapple, roast turkey, toffee and hot buttered toast. So she drank the rest of it before shrinking to the size of a pencil, at which point things got curiouser and curiouser… 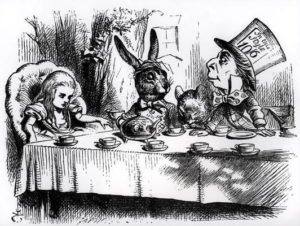 In this strange new World there were loud and antagonistic politicians who shouted “Off with his head!” and made up intricate rules which sometimes conflicted and which they frequently broke themselves. Alice decided she’d have to use her common sense and created a lengthy document describing exactly how it would be possible to stage a race-meeting, with stringent controls and an acceptably low risk for all concerned, without a crowd.

Which was when the tea-party started. Sat at one end of the large table in the garden was March Hare, the Hatter and a Dormouse. “There’s no room, No ROOM!” they cried.

“There’s plenty of room,” replied Alice indignantly. “The Queen of Scotland says that we’re allowed to meet up with one other household outdoors in a private garden, providing that social distancing is maintained. And if we’re able to safely rig up a television outside, we can enjoy Royal Ascot on ITV together too. And furthermore, not only will the social activity relieve loneliness and depression, but the racing itself will generate work for thousands of people including many businesses within the delicate rural economy.”

Alice woke, on the grassy bank, to the sound of the radio. Garry Richardson was issuing a tip for Royal Ascot week “Sceptical – in which ever race he runs,” he said, before apologising profusely for his intemperate outburst on the radio two months earlier.

Alice was sceptical too. An apology from a Today Programme presenter? What a weird dream!