A bitter cold descended at nightfall, a crisp frost biting into the ground before I’d even reached my bed. When temperatures plunge in the days before a race-meeting, sleep comes but fitfully to racecourse managers.

I awoke to the sound of wailing and the jangling of chains. “Ebenezer Garratt! Ebenezer Garratt!” wailed the voice, “I am the ghost of Christmas Past, the first of three spirits to visit you this night.”

“Oh spirit!” I exclaimed fearfully, “Is there a chance that you could tell me what will win the Persimmon Homes Scottish Borders National at Kelso on Sunday? I am in much need of inspiration for my weekly blog.”

“I am the ghost of Christmas Past.” Repeated the voice. “I can only remind you of what has been…” 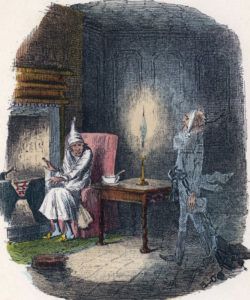 The ghost proceeded to show me scenes from Christmas festivals past. There was that formative year, in 1984, when I watched the three runner King George VI Chase on television – willing on Wayward Lad, only to be captivated by the pulsating finish that was fought out between Combes Ditch and Burrough Hill Lad. And I saw the King George of 1987 too, when I took my brand new binoculars to enjoy Desert Orchid winning for the second successive year. Except he didn’t, because he faded into a distant second place behind the unconsidered Nupsala.

These disappointments paled to insignificance against the days when there was no racing at all – the frosty abandonment of the Southern National at Fontwell Park on 30th December 2000, when the race was due to be broadcast live by Channel 4, and the abandoned renewals on New Years Eve 2001 and 2002. For good measure, the ghost showed me a frosty Kelso in December 2017, when we lost two days, including the Scottish Borders National, beneath the whitened turf.

The spirit disappeared as quickly as he had arrived, only to be replaced by the ghost of Christmas Present. “You will race!” said the ghost, pointing at a weather map which clearly showed sunny weather for the weekend, and positive night-time temperatures. “But your tips are lousy,” he said “and they always have been”. The ghost showed me scenes of readers of this blog (you might have been among them), shaking their heads in despair at the names of my selections. “This guy couldn’t tip water out of a bucket!” one reader was telling his friend, before breaking into hearty fits of laughter. The bookmakers rubbed their hands together.

Alas, he did not – so I can’t tell you exactly what happens. But before I woke, I did see thousands of happy racegoers celebrating on a bright sunny day at Kelso. And among them was Harriet Graham – trainer of Scotswell, who has run well in the race before.