The Tweed and its network of tributaries are so full of water at the moment that they are backing up towards the racecourse at Kelso. A puddle, large enough to lose your car in, has developed at the road junction just below the stables which threatens to engulf the whole site.

Beneath the dark clouds that smother the tops of the surrounding hills, a whiff of apocalypse hangs in the air – first there was the Covid plague (the teeth of which have been blunted by our anti-social distancing), now it’s time for the flood. I’m thinking about building a wooden frame around the old listed Grandstand so that, if it becomes necessary, we can float it away in a similar manner to Noah’s Ark.

If we can steer the building downstream to Berwick, we might be able to paddle north to a new location at Musselburgh, where this week’s selection is Dino Boy who gets the nod ahead of The Ferry Master in the Edinburgh National on Saturday. Both horses were winners at Kelso before Christmas, Dino Boy having led the field home in the Persimmon Homes Borders National over a similar marathon trip. A twist of Kelso form flavours several of the races at Musselburgh’s Cheltenham Festival Trials Meeting with other recent Berrymoss winners including: The Delray Munky, Monsieur Co and Mahlervous (all with good chances).

Noah was able save his family and most of the planet’s wildlife by taking breeding pairs of animals with him into the Ark. Famously, he left behind the unicorns – a sad omission for which I believe he should be held to greater account. While I hope that it won’t be necessary to find a male and female of each species to load into the Grandstand, the contemplation of such tasks does exercise the mind in respect of who or what we should save for a post-apocalyptic day.

And the matter took on even greater meaning this week when I read the headline ‘Britain hasn’t Got Talent’, referring to the scrapping of this year’s version of the ITV talent show due to safety concerns. Frankly, I’d be happy to let quite a few of the established acts disappear beneath the water: out with the chainsaw jugglers, the knife throwers and escapologists; gone with the mime artists, opera singers and dance troupes (especially the children’s dance troupes with their nauseating smiles and loud music). 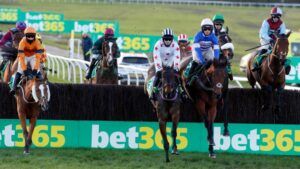 Saved would be the talent from another ITV show – one of the success stories of lockdown broadcasting: ITV Racing. The team has taken us to a widening portfolio of venues including all five Scottish racecourses in the last few months with trips in the near future planned for Musselburgh on Saturday and Sunday, as well as to Kelso for ‘bet365 Morebattle Hurdle Day’, Saturday 6th March.

There’d also be a place on the Grandstand life-raft for Aye Right – this blog’s locally trained nomination for ‘Horse of the Year’. Having never finished out of the first four in nine outings at Kelso, I hope we’ll be seeing him again one day, when the floods recede.